Just because the Dow Jones Industrial Average ( ^DJI 0.00% † is chock-full of blue-chip stocks doesn’t mean it’s immune to sell-offs. The index sits nearly 7% below January’s peak, and at one point last month it was down as much as 12% from that high. It also looks like it’s trying to test last month’s low again, and for a handful of Dow names, the past three months have been even worse.

If you’re a seasoned investor, you know these soft patches are ultimately buying opportunities. You can’t keep a good stock down forever. To this end, here’s a rundown of three of the Dow’s worst-performing stocks of late. Each is ready to bounce back for all the right reasons. 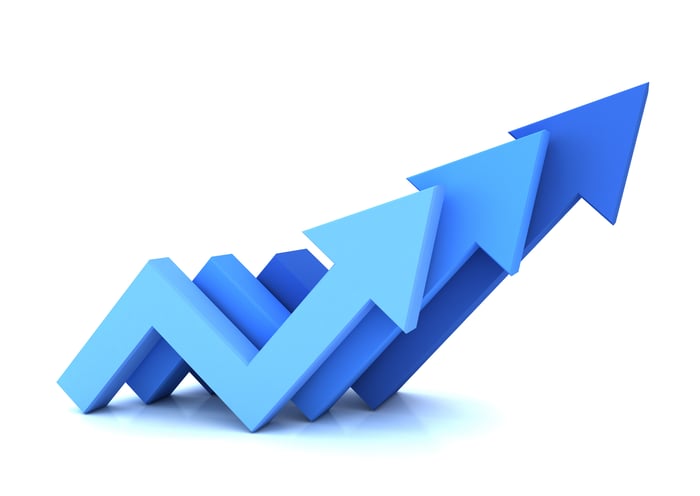 On a comparative basis, the underwriting (IPO) market feels lackluster here. A combination of inflation and Russia’s invasion of Ukraine is taking a toll on the economy and the market, causing some companies to postpone planned public offerings and other dealmaking. EY (formerly called Ernst & Young) estimates the first quarter’s total initial public offerings fell 37% from year-ago levels, while the total amount of money raised via public offerings fell 51%.

This dried-up IPO market took a big bite out of Goldman Sachs† (GS -0.10% † bottom line too. Although its first-quarter revenue and earnings topped analyst estimates, that pleasant surprise was supplied by strength from its trading and wealth management arms. Investment banking revenue slumped 36% year over year, prompting a 48% decline in net earnings. Despite the beat, torn investors simply let the stock drift sideways in the wake of the news, trying to figure out if this is the shape of things to come.

All these numbers, however, paint a misleading picture of the current underwriting market as well as Goldman Sachs’ stock’s woes.

Fact: The first quarter’s IPO slump isn’t a slump at all. It’s just being compared to the first quarter of 2021, which saw a massive number of pandemic-postponed public offerings finally come to fruition. As EY pointed out a year ago, Q1 2021’s public offering activity was the most fevered it had been in 20 years. And that strength persisted. EY adds that the fourth quarter’s public offerings reached levels not seen since the final quarter of 2007, capping off what would be a record-breaking year for IPOs.

At the same time, while the 24% pullback has been a painful one for Goldman shareholders to ride out, the bulk of the 227% rally from March 2020’s low to last November’s high is still intact.

Don’t let a little profit-taking now lead you to the wrong conclusion here. Goldman Sachs is expected to start growing again next year. The stock may start to recover well before then.

Microsoft (MSFT -2.71% † shares are another victim of a little too much euphoric-driven success in the midst of the COVID-19 pandemic, setting the stage for profit-taking now that the effect of the coronavirus contagion has been curbed. Specifically, following a 165% run-up between early 2020 and late 2021, the stock’s now sitting 18% under that peak.

The bullishness is completely understandable. With millions of employees suddenly forced to work from home, employers needed online collaborations solutions fast. In addition to its familiar office productivity software, Microsoft also offers online video/voice conferencing, security, and other options needed by remote workers. Now that the pandemic is fading away (or being ignored), though, investors fear companies are rethinking the need for all these work-at-home options.

The thing is, most of Microsoft’s business isn’t hyper-reliant on at-home employees. Regardless of where they work, employees need access to software like Excel or Word. And, while they don’t necessarily need them as desperately as they did a year ago, many companies are holding onto their online collaboration and communication tools, just in case an unexpected disruption surfaces again in the future.

Never even mind the fact that a huge chunk of Microsoft’s business comes from hybrid cloud platforms, video gaming, and operating systems. These are mostly unaffected by where workers are actually doing their jobs.

This recent weakness is a chance to plug into Microsoft shares in front of what analysts say will be sales growth of 18% this year, and 14% next year.

Finally, add Nike (NKE 4.68% † to your list of beaten-down Dow Jones stocks that could be ripe for a reversal.

It’s not a name that needs much of an introduction. Nike, of course, is the world’s most recognized athletic apparel brand, with estimates suggesting it controls anywhere from 40% to 60% of the global athletic shoe market. Even at the lower end of the range, that’s huge.

This dominance hasn’t impressed investors much of late. Shares are down nearly 30% from record highs hit in December, with the pandemic’s resurgence and fresh geopolitical tensions — particularly tensions involving China — crimping supply chains and straining ties with a key market for Nike; nearly 20% of its sales are made in that market.

For all its challenges, though, Nike’s got more working for it than against it.

Its ongoing shift toward greater self-sufficiency is one of the things working for it. More than one-third of its revenue now comes from sales made directly to consumers, bypassing third-party retailers that eat into profit margins. Another edge Nike enjoys is its capacity to innovate. Not that it really needs it, but the company recently confirmed it will be opening a new technology center in 2023 that will, among other things, think up ways to improve its customers’ experiences using artificial intelligence. Nike already changed the athletic footwear game by letting consumers custom-build their own sneakers via a platform called Nike By You.

Shares might need some time to reblossom, but it will be worth the wait.