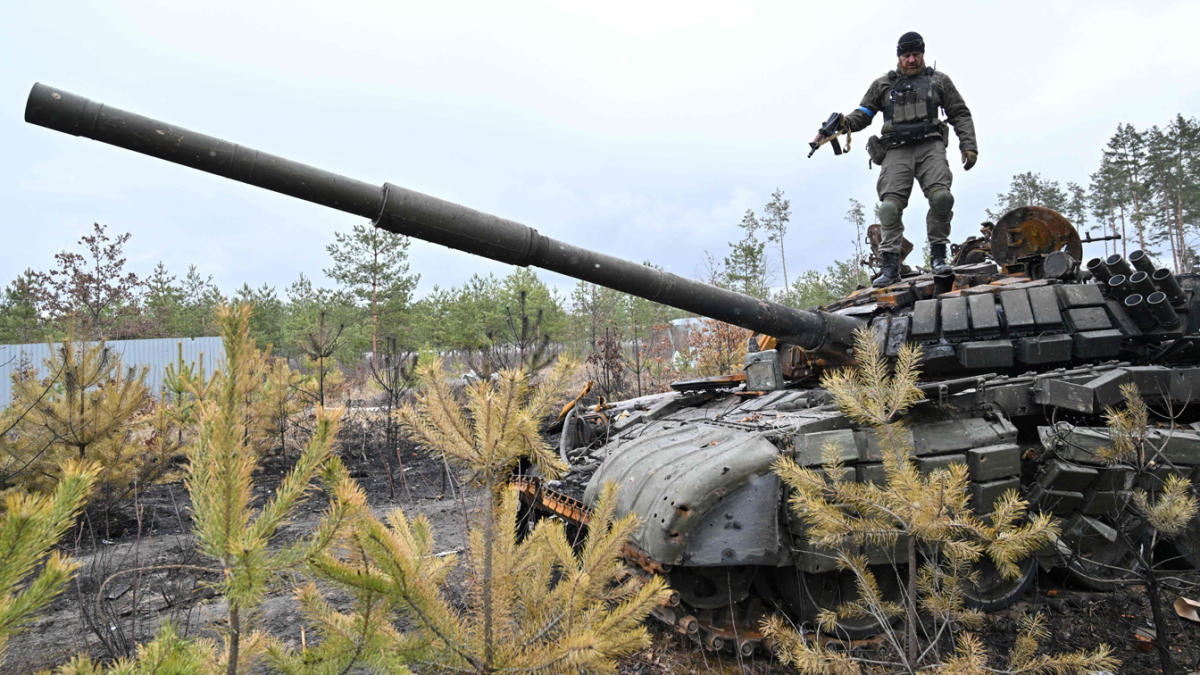 Despite having only the fourth-largest military in the world, Russia is the superpower when it comes to its supply of tanks, with 12,950 in 2020 — more than double the number of the US, which came in second with 6,333 vehicles.

As Russia’s invasion of Ukraine continues into its seventh week, it appears that President Vladimir Putin’s military forces might be taking a toll. Pictures of destroyed Russian tanks have been posted and shared across social media since the beginning of the war.

As of March 24, the Kremlin had lost hundreds of tanks since the war began in February, Ukraine’s Foreign Ministry stated. Russian vehicles have suffered heavy losses thanks to Ukrainian troops armed with antitank missiles, including the UK’s Next Generation Light Antitank Weapon, or NLAW, and the American Javelin antitank missile.

This has led some experts to say that warfare has changed, and that tanks and armored personnel carriers are now obsolete. “They are too expensive & are easily destroyed with manifold light anti-tank weapons or drones,” Anders Aslund, an expert on Russia, Ukraine and Eastern Europe, wrote on Twitter†

According to the open-source intelligence organization Oryx, Russia has lost a total of 450 tanks: 221 were destroyed, six were damaged, 41 were abandoned and 182 were captured. And Russia could lose more with the introduction of Switchblades, US combat drones designed to attack personnel and light vehicles. On Tuesday, defense officials announced they were training Ukrainian soldiers in the US on how to use the weapons to attack enemy tanks and armored vehicles. These 100 drones, which are carried in a backpack, were part of an $800 million military aid package to Ukraine.

So with Russia having lost hundreds of tanks, does this mean these armored vehicles are now becoming obsolete in modern warfare? According to Scott Boston, a senior defense analyst at the global policy think tank RAND Corporation, it’s a definite “not yet.”

Last month, Ukrainian President Volodymyr Zelensky asked NATO to either donate or sell 500 tanks to his country. “You have at least 20,000 tanks,” he said to the alliance’s heads of state. “Ukraine asked for a percent, 1% of all your tanks to be given or sold to us.” A number of countries in the organization use the same Soviet-era tanks and armored vehicles that Ukrainian soldiers already use themselves. However, it is not clear what type of tanks Zelensky was asking for.

One reason a large amount of Russian tanks have been destroyed, Boston said, is that Russia is doing the attacking — meaning Ukrainians are on the defensive, so they are targeting more enemy munitions. Boston said this is likely to change and more of Ukraine’s tanks would be destroyed when it transitions to the offensive.

Another reason for the graveyard of tanks is that Ukrainians are intelligently targeting Russian logistics, and so the ability to get fuel to the frontline has proved difficult. According to Boston, one specific Russian tank division lost a lot of vehicles due to abandonment rather than direct enemy action.

With this in mind, Boston told Yahoo News he doesn’t know that “we’re yet in the last generation of human-operated tanks.” He explained that this is because infantry will be used on battlefields for many years to come, and so protected transport for soldiers on foot will also be needed. “It’s an insurance policy for your infantry,” he said. “And the infantry protect the tank. That’s why they call it the ‘combined arms’ team. Without it, the tank is just as useless as everything else.”

One former British Army officer† now a defense military analyst, said people should be careful to “avoid drawing the wrong conclusions” on tanks. “Russia’s disastrous tactics have been a terrible advertisement for tanks,” Nicholas Drummond wrote on Twitter† “No artillery support. No infantry support. No air support,” he said, referring to images showing destroyed Russian tanks. “This is not how combined arms tactics work in an era of multi-domain operations.”

But how was there no support available for these tanks? According to Boston, “Russia went into this fight apparently thinking that they had bribed enough Ukrainian officials. And very few Ukrainians actually wanted to fight them, and [the Russians] believed they weren’t going to encounter serious resistance. They appear to have built their operations plan around that incredibly faulty assumption.”

And so time will tell how tanks will show up during the course of this war, but one thing is for certain, according to experts: They will be around for a lot longer.

What happened this week in Ukraine? Check out this explainer from Yahoo Immersive to find out.