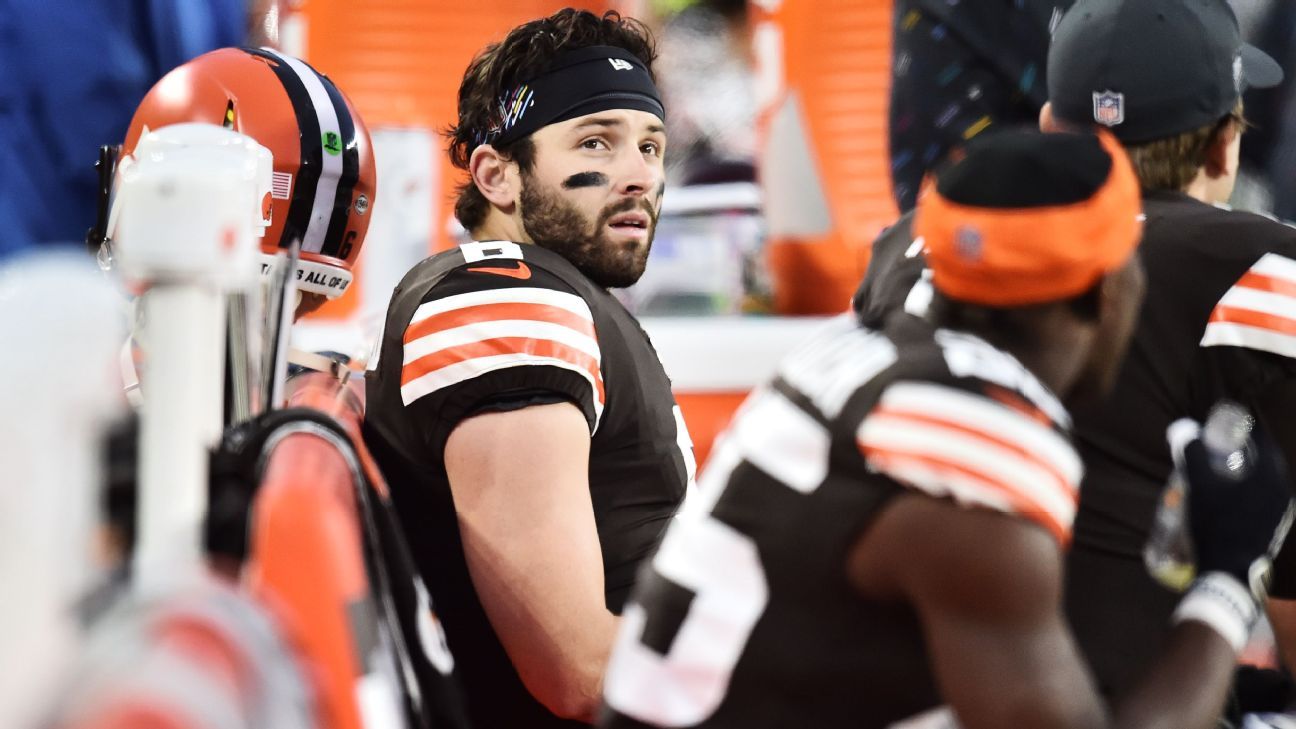 Baker Mayfield says he feels “disrespected” by the Cleveland Browns after they traded for Deshaun Watson last month, effectively ending Mayfield’s tenure after four seasons as the team’s starting quarterback.

“One-hundred percent,” Mayfield said on the YNK podcast released Wednesday. “I was told one thing and they completely did another.”

Mayfield covered a range of topics on the podcast, including where he might play next.

Though Mayfield remains on the Browns’ roster, the team is actively looking to trade him. Mayfield said the Seattle Seahawks, who traded away star quarterback Russell Wilson to the Denver Broncos earlier this offseason, were “probably the most likely option” for him.

“Even then, no idea,” said Mayfield, who is under contract for 2022 for $18.9 million — fully guaranteed — after the Browns picked up his fifth-year option last year. “I’m ready for the next chapter.”

Mayfield requested a trade on March 17, two days after Browns owners Jimmy and Dee Haslam, general manager Andrew Berry and head coach Kevin Stefanski flew to Houston to meet with Watson in an attempt to convince him to waive his no-trade clause.

On March 18, Watson told the Browns he was picking them over the Atlanta Falcons, New Orleans Saints and Carolina Panthers.

Watson still faces 22 civil lawsuits from women who have accused him of sexual assault and inappropriate conduct, and he said during his introductory news conference with the Browns on March 25 that he “never assaulted any woman” or “disrespected any woman.”

When the Browns do officially move on from Mayfield, he will become just the third quarterback in NFL history to go No. 1 overall in the draft and last four or fewer seasons with the team that drafted him, according to ESPN Stats & Information, joining JaMarcus Russell (Raiders) and Jeff George (Colts).

“I really, truly honesty have no regrets of my time in Cleveland of what I tried to give to that place,” Mayfield said. “True Clevelanders and true Browns fans know that.”

After quarterbacking the Browns to their first playoff victory in 26 years in 2020, Mayfield struggled last season while playing through a torn labrum in his left, non-throwing shoulder. He eventually finished ranked 27th in the league in QBR as the Browns finished with a losing record and missed the playoffs.

“I’d be lying to you if I didn’t say that I got caught up in all the negativity and stuff during the year last year,” said Mayfield, who was booed during a 13-10 home win over the then-winless Detroit Lions on Nov. 21.

Mayfield suffered the shoulder injury in Week 2 against the Houston Texans. He only missed one game after aggravating the shoulder injury a month later, though he also sat out the season finale once the Browns had already been eliminated from the postseason.

Mayfield said the shoulder injury was especially tough because of how it affected his play both physically and mentally.

“I was trying to be tough and fight through it, but then physically I wasn’t as capable of doing what I would normally (do),” Mayfield said. “When I wasn’t performing on the field, that’s when it really started to go downhill. Because I can tough it out, I don’t care, I’m not going to complain about it, like everybody is banged up. But then when it started hindering my play and going downhill, that’s when I was like, oh s—.

“That’s when I started losing my own self-confidence and losing myself. This past year was rough. It was. It was rough on me, my family. It sucked because I knew what I could be doing, but I physically wasn’t in a state to do it.”

After pointing out that he had played for four different head coaches in four years, Mayfield said he’s “just looking for stabilization” wherever he ends up next.

“I know what I need to do for me to be the best version of me and be able to lead an organization,” Mayfield said. “I’m in a good place right now”