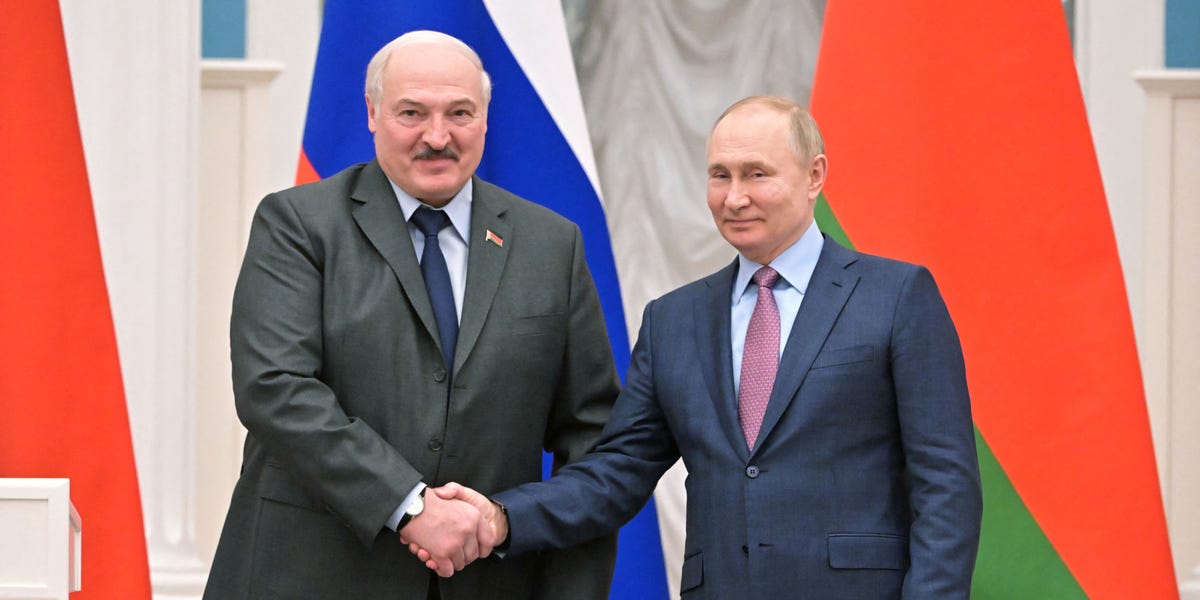 Belarus’s authoritarian leader Alexander Lukashenko in a new interview with the Associated Press said he opposed the use of nuclear weapons in the Ukraine war.

Some Western officials and experts have expressed concerns that Russian President Vladimir Putin might employ weapons of mass destruction in Ukraine if he gets desperate enough, as Russia’s military struggles to make major gains in the war.

Lukashenko, widely seen as Putin’s puppet, said the use of nuclear weapons in Ukraine would be “unacceptable because it’s right next to us — we are not across the ocean like the United States.”

“It is also unacceptable because it might knock our terrestrial ball flying off the orbit to who knows where,” he added. “Whether or not Russia is capable of that — is a question you need to ask the Russian leadership.”

Russia has made nuclear threats since launching the Ukraine war. Putin said he was putting Russia’s nuclear deterrence forces on high alert in late February, and last month Russian Foreign Minister Sergey Lavrov warned that the threat of nuclear war should not be underestimated.

A senior US defense official told reporters last week that the US does not assess there’s a threat of Russian using nuclear weapons in Ukraine, per Reuters. But CIA Director William Burns in mid-April also said that the US can’t “take lightly the threat posed by a potential resort to tactical nuclear weapons” by Putin in Ukraine.

Lukashenko also seemed to express impatience with the duration of the Ukraine conflict, which Belarus has helped Russia carry out, in his interview with the Associated Press.

“I am not immersed in this problem enough to say whether it goes according to plan, like the Russians say, or like I feel it,” the Belarusian dictator said, adding, “I want to stress one more time: I feel like this operation has dragged on.”

Lukashenko has been Putin’s closest ally amid Russia’s unprovoked war in Ukraine, and under his leadership Belarus has served as a launching pad for the conflict. Russian troops in Belarus were permitted to cross its border into Ukraine, and wounded Russian soldiers have been treated in Belarusian hospitals. After its battlefield defeat outside Kyiv, damaged Russian forces retreated to Belarus to reorganize. Belarus has been the target of Western sanctions as a result.

“We see Belarus as deeply tied to the outcome in Ukraine. It is among the many reasons that what happens in Ukraine is going to reverberate well beyond its own borders,” Julie Fisher, US special envoy for Belarus, recently told Foreign Policy, adding , “It is an immediate and direct link when it comes to Belarus.”

In 2020, Lukashenko faced mass protests after he won a sixth presidential term in an election much of the international community considered to be rigged. Lukashenko has relied heavily on the Kremlin’s economic and political backing to stay in power, and Moscow has offered this support because it views Belarus as an important barrier between Russia and countries that are part of the EU and NATO.

In the Associated Press interview, Lukashenko referred to Putin as his “big brother,” boasting that the Russian leader doesn’t have “closer, more open or friendlier relations with any of the world leaders other than the president of Belarus.”

He also blamed the US for the conflict in Ukraine, despite Russia launching the war without being attacked. “The US wants to seize the moment, tying its allies to itself, and drown Russia in the war with Ukraine. It’s their goal — to sort out Russia, and then China,” Lukashenko said.