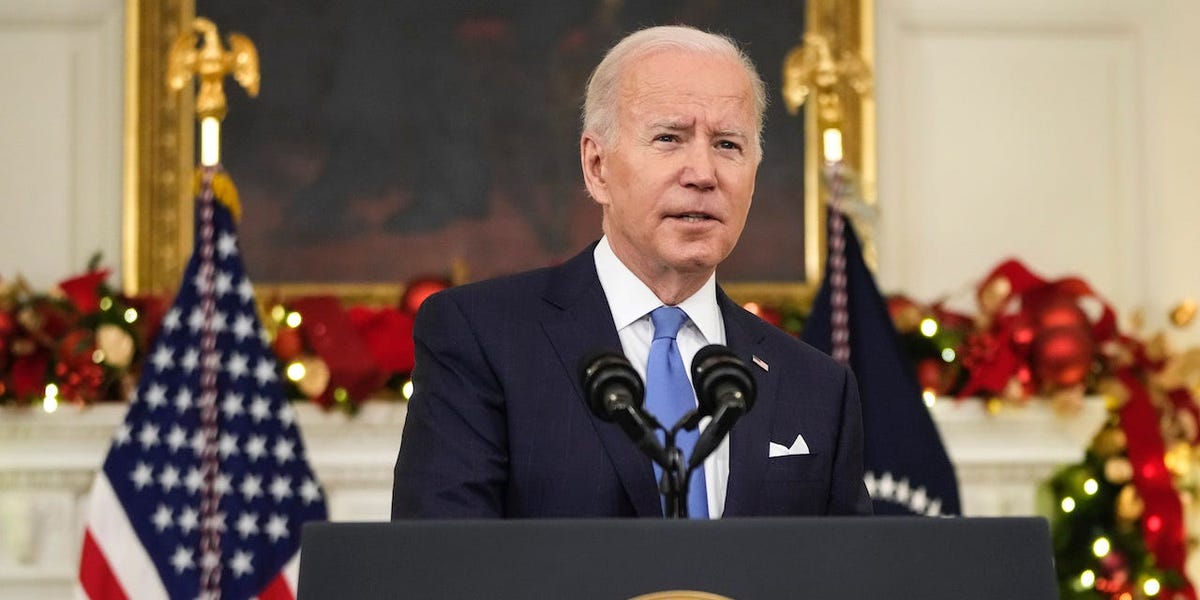 On April 1, 2021, President Joe Biden asked the Education Department to prepare a memo on his legal ability to cancel student debt.

On November 1, Insider received redacted documents from the Debt Collective — the nation’s first debtor’s union — that showed the memo had existed since April 5, 2021, and circulated among White House leadership that same day.

Now, a year after the memo’s creation and two extensions of the student-loan-payment pause later, borrowers and lawmakers want answers.

“While I welcome the extension of the student loan moratorium, I continue to believe that we owe it to the 43 million Americans with student loan debt to fully cancel that debt,” Rep. Ilhan Omar of Minnesota said in a statement to Insider. “Unfortunately, a year after it was promised, we have yet to see the memo the administration promised on student debt cancellation.”

When Biden was on the campaign trail, his intentions for handling the $1.7 trillion student-debt crisis seemed clear. He pledged to voters he would approve $10,000 in student-loan forgiveness for each federal borrower and said it would be a top priority for him in reforming long-broken loan-forgiveness programs.

While he has taken steps on the latter, the former remains unfulfilled, and borrowers and lawmakers are growing frustrated as Biden stalls on a promise many voters are relying on.

In October, before the release of the redacted documents, Omar led her Democratic colleagues in giving the president a two-week deadline to deliver the memo. In January, she joined 84 of her colleagues in pushing for not only the release of the memo but also an extension of the pause on student-loan payments, which Biden ended up implementing last week through August 31.

But it’s been over a year, and Omar told Insider it was long past time for Biden to be transparent with his voters.

“When leaders of the Progressive Caucus and I met with the President earlier this month, we stressed the importance of not just suspending, but canceling student debt,” Omar said.

“The President has the full authority to cancel this debt,” she added, “and we hope he will do so.”

When Insider reached out for comment, a spokesperson replied: “The Department of Education continues to assess its options for implementing broad debt cancellation by executive action.”

While the vast majority of the student-debt memo was redacted before Insider received it, the documents did disclose some information regarding the communication process within the administration surrounding the creation of the memo.

For example, an Education Department official wrote that based on internal emails in April 2021, the department would “likely be preparing an updated version of the memo prepared in February,” which suggested the administration could have been sitting on a memo even longer.

Braxton Brewington, the press secretary for the Debt Collective, told Insider at the time that choosing not to release the memo was a “political decision,” and he reiterated that sentiment in a statement this month.

“A year has passed since the White House was informed of their authority to widely cancel student debt and yet they’ve chosen to sit on their hands while families suffer financially,” Brewington said. “It’s clear the hold-up on student debt cancellation isn’t due to faulty legal analysis, but rather a lack of political will — which makes even less sense as the majority of Americans support student debt cancellation. It’s time for Biden to take action .”

Following Biden’s fourth extension of the student-loan-payment pause last week, Insider reported that neither Democratic nor Republican lawmakers were satisfied with the relief.

While the GOP wanted broad relief to end, Democrats wanted even more relief, saying that if Biden could keep extending the pause, there’s no reason he could not cancel student debt and make permanent reforms to the student-loan industry.

It’s unclear whether more relief will come for student-loan borrowers once September rolls around.

“Glad to see the President extend the moratorium on student loans,” Omar wrote on Twitter. “Once this extension expires he should extend it again. And then after that, again. And then again, and again…actually you know what, why don’t we just cancel it?”