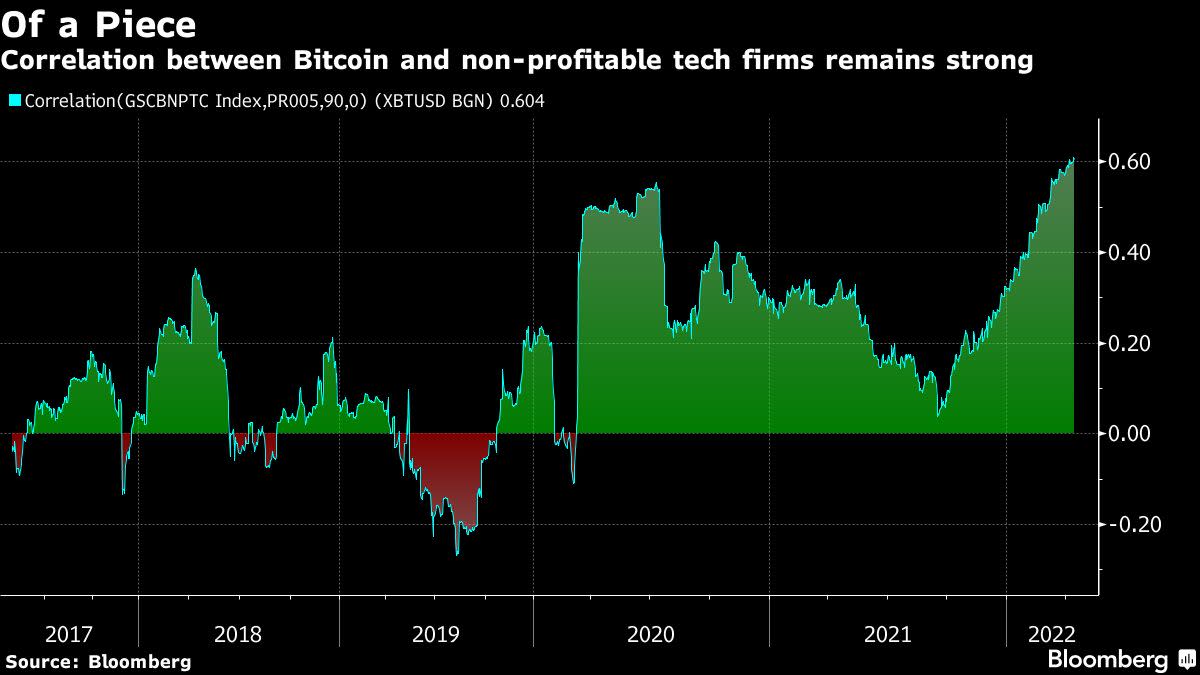 (Bloomberg) — A funny thing happened to Bitcoin as interest rates started to rise: trading volumes went way down. Now market-watchers are grappling with the implications and what a world of less-loose monetary policy means for digital assets.

The aggregate 30-day moving-average volume for Bitcoin across Coinbase, Bitfinex, Kraken and Bitstamp is at its lowest level since August 2021, according to data compiled by Strahinja Savic at FRNT Financial. Over the last month, the aggregate daily volume on those venues has averaged just over $1 billion. That reading stood at $2.57 billion in May 2021, a nearly 60% decline.

That’s happened as the Federal Reserve and other central banks accelerate their fight against inflation, which has remained hotter for longer than many had expected it would. With rates rising and the cost of money no longer hovering around zero, crypto prices have flagged, prompting investors to recalculate their desires to be invested in the cutting-edge market.

For one, the withdrawal of liquidity impacts volumes in crypto — and elsewhere — by reducing the funds available to invest, says Noelle Acheson, head of market insights at Genesis Global Trading. Second, higher rates increase the opportunity cost of investing in non-yielding assets such as Bitcoin. And those buying the coin using leverage could feel an extra pinch: higher borrowing costs alter the risk-reward scenario of such trades, meaning that your potential return drops as your costs go up.

“Volumes are down because of the uncertainty,” she said. “Investors seem to be worried that things could get worse before they get better.”

Acheson notes that the percentage of Bitcoin that has not moved for over a year is at an all-time high, with roughly 76% of the coin held in addresses considered illiquid, meaning they exhibit little movement.

While that could show conviction in the idea Bitcoin could be used as a store of wealth in an environment of “intensifying macroeconomic uncertainty and unrest,” for now, “price movements are determined by the risk preferences of macro investors who are concerned about the global rates and economic outlook.”

Data from Glassnode suggests that interest in Bitcoin has remained muted — on-chain measures indicate little growth in the coin’s user-base and minimal flows of new demand. Plus, Bitcoin has been stuck in a tight trading range as it’s largely dominated by HODLers, a term that refers to investors who’ve got the gumption to stick around during major bouts of volatility.

Strategists at the research firm say “it is hard to find many observations that suggest the network user-base is recovering or growing strongly.” They cite the number of active entities, something akin to daily active users — that measure is stuck in the same bear-market channel it’s been mired in for six years.

David Shafrir, CEO of SDM, an institutional OTC trading desk, says he’s seeing new clients coming in but that average volumes from pre-existing clients have dropped anywhere from 8% to 15%. A slowdown in consumer power is one factor behind that, as is uncertainty around the Fed’s reaction to persistently high inflation.

That’s “caused some significant insecurity within the entire market as a whole,” Shafrir said by phone. “Now we’re starting to see the effects of that.”

As is the case with other asset classes, Bitcoin needs new backers for prices to stabilize. The emergence of new crypto fans — institutional as well as retail — over the past two years coincided with a skyrocketing in prices. Bitcoin rose more than 300% in 2020 and another 60% in 2021. That desire to be in on the asset class may have changed — so far this year, it’s lost more than 10% amid a similar slump in other riskier assets, with analysts saying it will take a whole new catalyst to jolt prices higher once again.

“We’re not getting follow-through from new investors. Despite the relentless advertising, most of those who were inclined to buy Bitcoin have already done so,” said Steve Sosnick, chief strategist at Interactive Brokers LLC. Ultimately, Bitcoin is a risk asset and will behave the way other risk assets do, he said.

An oft-cited measure is that of Bitcoin’s correlation to other areas of the traditional market that might be hurt in a rising-rate environment. The 90-day correlation coefficient of the coin and a basket of non-profitable tech stocks now stands above 0.60, the highest such reading on record. (A coefficient of 1 means the assets are moving in lockstep, while minus-1 would show they’re moving in opposite directions.)

Meanwhile, Bank of America’s Alkesh Shah and Andrew Moss in an April 12 note said that Bitcoin exchange outflows in the prior week totaled $1.2 billion and were the largest of the year. The week prior to that one saw investors pulling out $532 million. Overall, exchange outflows in recent weeks were many times larger than average outflows seen during weeks at the start of February and the beginning of March. The strategists say the trends “indicate that investors are HODLing.”

Still, Russell Starr, CEO and executive chairman of DeFi Technologies, says Bitcoin is more an inflation hedge than a risk asset. Inflation is likely worse than current readings are reflecting, he says, citing a common refrain in the crypto community. The US could fall into a recession and that would spur the Fed to loosen monetary policy again, he said.