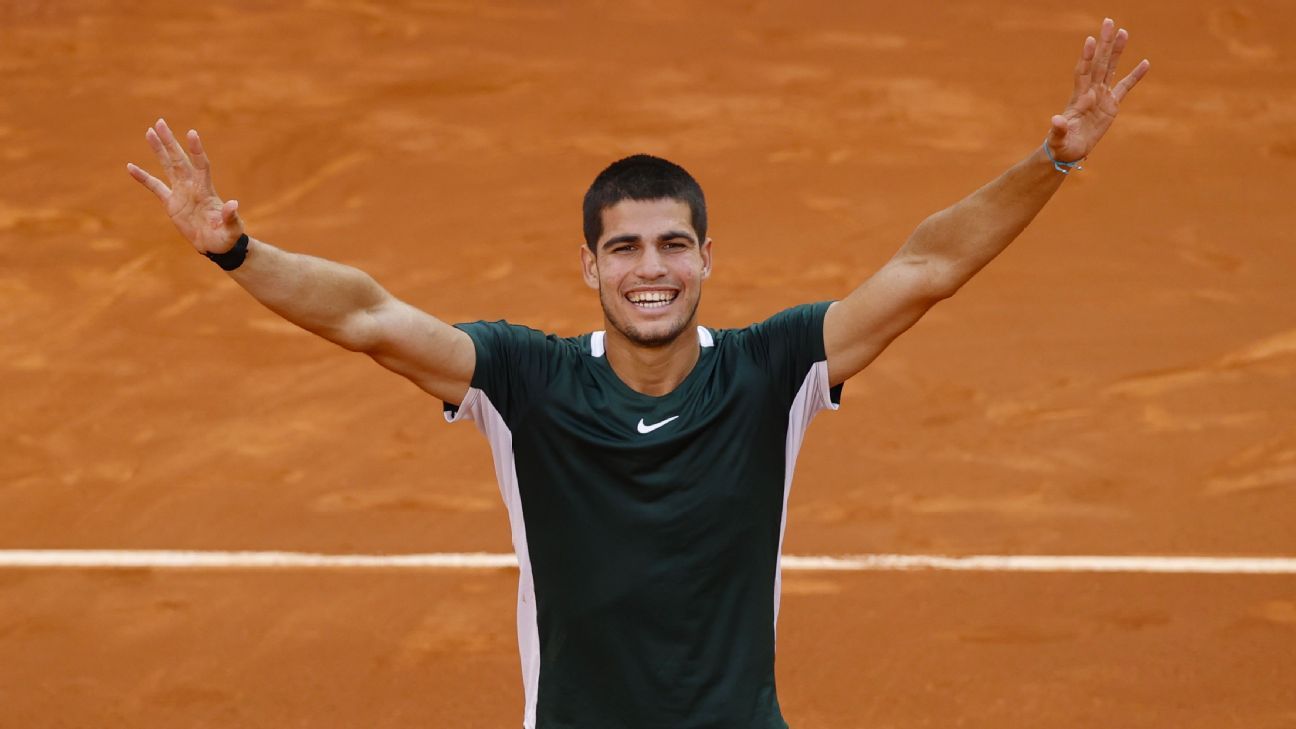 MADRID — After beating Rafael Nadal on Friday, Spanish teenager Carlos Alcaraz did it again Saturday with an upset of world No. 1 Novak Djokovic at the Madrid Open tennis tournament.

“It was one of those matches to enjoy,” Alcaraz said. “Despite the tension, despite being the semifinals of a Masters 1000, being 7-6 in the third-set tiebreaker… I’ve enjoyed it. Until the last point I was being able to smile.”

Alcaraz converted on his third match point to clinch the victory in front of a raucous home crowd on the Caja Magica center court. He became the first player to defeat both Djokovic and Nadal at the same clay-court event.

“To play against the No. 1 player in the world, in front of this crowd here in Madrid, it’s incredible,” he said.

A win Sunday will give Alcaraz his fourth title this season, the most of any player.

He will face defending champion Alexander Zverev or Stefanos Tsitsipas, who met in the late semifinal Saturday.

Alcaraz, the youngest player in the top 10 since Nadal in 2005, has won this year in Miami, Rio de Janeiro and Barcelona.

He beat Nadal for the first time on Friday, then triumphed against Djokovic in their first match, becoming just the fifth player to defeat the two superstars on back-to-back days — and the first to do it since Roger Federer achieved the feat at the 2010 ATP Finals.

Alcaraz also became the youngest player to defeat an ATP world No. 1 since Nadal beat Federer in the 2005 French Open semifinal on his 19th birthday.

Djokovic remains without a title this season as he continues to try to regain his best form going into his title defense at the French Open this month.

Alcaraz, the youngest ever to reach the Madrid semifinals, took an early lead in the first set but Djokovic rallied.

The Spaniard took the second set after Djokovic wasted three break opportunities to serve for the match, and kept the pressure on during the third until finally capitalizing on one of his many chances in the tiebreaker.

The match winner came was one of Alcaraz’s more than 30 forehand winners that kept Djokovic on the defensive throughout. Alcaraz had 51 winners to Djokovic’s 24.

“It was so close,” Alcaraz said. “He had the chances to break my serve at the end of the second set. In the first set as well it was so close in the tiebreak. Honestly I don’t know what made the difference.”

Djokovic praised Alcaraz after arriving in Madrid this week, and said his son had already replaced Nadal with the young Spaniard as his favorite player.