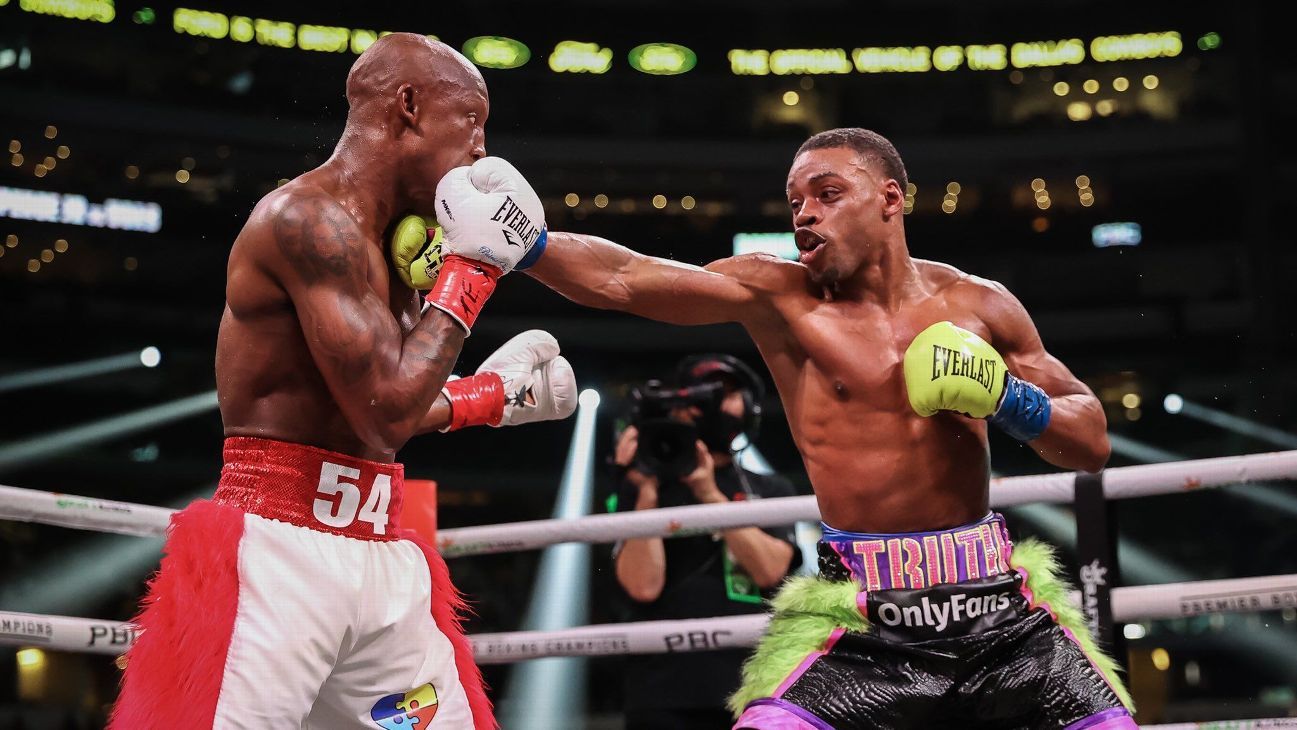 ARLINGTON, Texas — Errol Spence Jr. was dazed as he peered around the ring looking for his mouthpiece.

Yordenis Ugas sent it flying on Saturday after he connected with a brutal right hand in Round 6, before referee Laurence Cole slowly moved to halt the action to allow Spence to retrieve it. That’s when Ugas connected with a left hand followed by a right that sent the distracted Spence careening into the ropes for what could have been called a knockdown.

The series of events seemed to only reinvigorate Spence, who was fighting in front of his hometown fans at AT&T Stadium for the third time in four fights. He began to attack far more aggressively during the following round and took control of the bout after he buckled Ugas with a left uppercut. The systematic beating he dispensed on Ugas slowly but surely closed the Cuban boxer’s right eye before the ringside doctor advised Cole to stop the fight at 1:44 of Round 10.

“Everybody knows who I want next; I want Terence Crawford next,” said Spence, ESPN’s No. 6 pound for pound boxer. “That’s the fight that I want; that’s the fight everybody else wants. Terence, I’m coming for that motherf—ing belt.”

For years, Spence and Crawford have circled each other but never come close to finalizing a deal for what has long been one of boxing’s biggest potential bouts. Crawford’s win over Shawn Porter in November was the final bout of his long-term deal with Top Rank, a promotional company that rarely does business with PBC, which promotes Spence’s fights.

Now that Crawford is a promotional free agent, the greatest roadblock to the matchup has been removed, and it appears to be a genuine possibility later this year.

“Congratulations, great fight, now the real fight happens,” Crawford tweeted at Spence. “No more talk, no more side of the street, let’s go!”

The superfight with Crawford appeared to be slipping through Spence’s grasp midway through the bout. Ugas, 35, continued to unload on Spence in Round 6 after he was sent crashing into the ropes as the favorite absorbed the punishment. Cole finally paused the bout this time, even though there wasn’t a lull in the action. The delay appeared to allow Spence, 32, to recover; he started firing punches at Ugas after the bout resumed.

“I thought the ref said ‘stop,’ so I stopped,” said Spence, who scored his first stoppage of a champion since he won the IBF title from Kell Brook in May 2017. “And then he hit me with three or four shots That’s my fault. That was a rookie mistake. You’re supposed to protect yourself at all times, and I didn’t do that. I wasn’t out on my feet. I turned and looked at my mouthpiece and he hit me .”

The sixth round was Ugas’ last stand. Spence, who mostly boxed off the back foot during the first half of the bout, now attacked with relentless pressure. The adjustment made all the difference. ESPN’s No. 2 welterweight targeted Ugas’ midsection, and it paid off as his activity dipped.

Of the 216 punches Spence landed, 70 were to the body, according to CompuBox. Spence threw a fight-high 110 punches in a fiery Round 8 and connected on 46.

Ugas battled it out with Spence on the inside, but his right eye continued to swell to the point he couldn’t see. He was hurt again in Round 8 following a series of shots before Cole paused the bout to allow the doctor to examine Ugas. After nearly a minute, the action resumed. This time, Ugas received the reprieve.

“I feel sad; I trained really hard for this fight,” Ugas, ESPN’s No. 3 welterweight, said through a translator. “All my respect to Errol Spence. He’s a great champion. … The referee stopped the fight, but I wanted to keep going to the end. I definitely had a chance to win the fight in the sixth round, but he recuperated well .”

In a twist, it was Spence’s left eye that led to this matchup in the first place. The 32-year-old was set to meet the legendary Manny Pacquiao in August, but Spence withdrew from the fight after a doctor diagnosed him with a detached retina.

Spence quickly underwent surgery as Ugas stepped in on 11 days’ notice for the life-changing opportunity. Ugas was already a champion and had dropped a controversial decision to Porter in a title bout earlier in his career, but this was a chance to establish himself as one of boxing’s elite.

Ugas rose to the occasion with a dominant decision victory in an upset and sent Pacquiao into retirement. Spence’s passing-of-the-torch fight disappeared like a puff of smoke, but another opportunity presented itself.

After he quickly recovered from the surgery, Spence passed up the routine tuneup bout and headed straight into the title unification with Ugas. The bout was Spence’s fourth consecutive on pay-per-view and third at the home of the Dallas Cowboys in his past four fights (announced attendance of 39,946).

Once again, Spence proved following serious injury that he remains one of the top fighters in all of boxing. After he defeated Porter in one of 2019’s best action fights, he was involved in a devastating single-car crash one month later in October.

Following the loss of several teeth and a hospital stay, Spence returned in December 2020 with a decision victory over Danny Garcia to retain his titles. And now, he has scored yet another impressive victory over one of the best welterweights in the world in his first fight back from eye surgery.

All that remains for Spence in the welterweight division, of course, is a long-awaited meeting with Crawford.