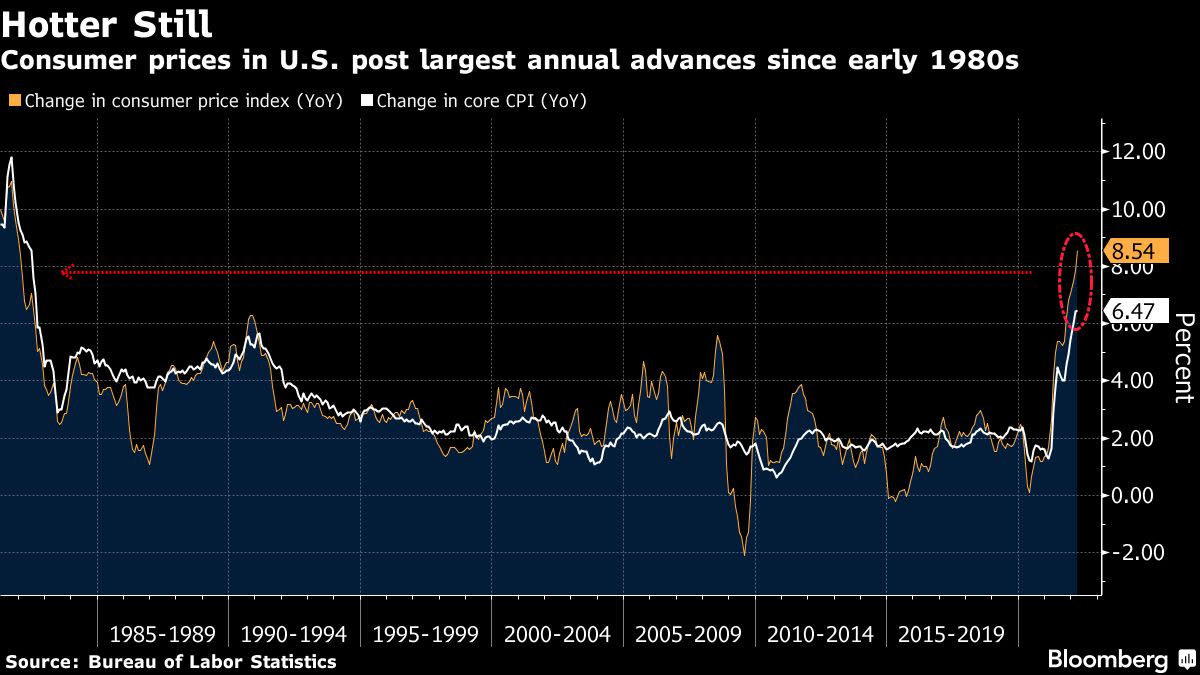 (Bloomberg) — Federal Reserve officials are reinforcing expectations they’ll raise interest rates by a half percentage-point next month, accelerating a hawkish pivot to curb the hottest inflation in four decades.

“I think that’s a reasonable option for us because the federal funds rate is very low,” Federal Reserve Bank of New York President John Williams said Thursday in a Bloomberg Television interview. “We do need to move policy back to more neutral levels.”

His remarks helped fan a sharp rise in 10-year Treasury yields to 2.80% after the interview from around 2.70% before.

The New York Fed chief’s comments are the latest to underline US central bank’s plans to lift rates back to levels that prevailed before the pandemic, or even higher. In addition to the quarter-point move they made last month, that implies around 200 basis points of tightening over the course of the remaining six Fed meetings this year to get rates to around 2.5%.

That message has been clearly heard by investors. Interest-rate futures are almost fully priced for a half-point hike at the Fed’s May 3-4 meeting, when officials could also announce a start date for beginning to shrink their almost $9 trillion balance sheet.

Williams voiced confidence in the Fed’s ability to soft-land the economy — cool price pressures without forcing a steep rise in unemployment — and said the Fed’s forward-guidance communications around its policy plans have already got the ball rolling.

“We’ve seen a dramatic, significant movement in yields and financial conditions over the past several months and that’s already positioning policy well to get supply and demand back into balance,” he said.

US consumer prices rose 8.5% in March from a year earlier, marking the biggest increase since 1981. The war in Ukraine has raised food and energy costs, pushing headline inflation further away from the Fed’s 2% target.

US central bankers, by their own admission, were slow to react and are now viewed as moving with determination to catch up.

“Generous fiscal policies, supply-chain disruptions, and accommodative monetary policy have pushed inflation far higher than I — and my colleagues on the FOMC — are comfortable with,” Philadelphia Fed Bank President Patrick Harker said in remarks at Rider University in Lawrence Township, New Jersey, adding that he is worried about inflation expectations becoming “unmoored.”

But the consensus among policy makers starts to fray about how much further above what they judge to be a “neutral” level for interest rates they’ll need to go, if at all.

Fed doves argue they don’t have to commit to doing more than getting rates to neutral until they’ve seen how the economy responds to the tightening that’s already been anticipated in financial markets.

They also point to balance-sheet roll-off as another factor cooling the economy. Minutes of their March meeting showed officials backing a plan to shrink it by $95 billion a month. In a question-and-answer session after his speech, Harker said the balance sheet will run off “methodically” and the process will start “soon.”

Fed Governor Lael Brainard, who is awaiting Senate confirmation to become vice chair, said the combination of higher rates and a smaller balance sheet will lower inflation to 2% over time. She also cited shifts in market expectations as evidence that the Fed’s forward guidance has already tightened financial conditions.

“In terms of exactly what the right pace of that set of increases in the policy rate from meeting to meeting, I don’t really want to focus on that,” she said Tuesday.

“By moving expeditiously to a more neutral posture, it provides the committee with optionality in either direction,” Brainard added, introducing an element of two-way risk to rates in case the economy starts to stutter.

Some economists have voiced concern that the Fed will tip the economy into recession by jacking rates up too high.

“It’s now clear they will hike by 50 base points in May,” said Thomas Costerg, senior US economist at Pictet Wealth Management. “The risk of policy mistake is rising since it is not clear at all the economy can digest several hikes of 50 basis points.”

But hawks like James Bullard of St. Louis want to get rates above 3% this year and call it wishful thinking to suggest inflation will subsidize without stepping hard on the policy brake.

Fed Governor Christopher Waller, who was previously Bullard’s head of research in St. Louis before joining the Fed board in Washington in 2020, said the economy could handle half-point hikes in May and possibly June and July as well.

“I don’t see any value in trying to shock the markets; we are not in a Volcker kind of moment,” he told CNBC in an interview Wednesday. “We will do what it takes to get inflation back down, but we can do that in an orderly way without causing a lot of financial-market stress.”

Cleveland Fed President Loretta Mester, during an event organized by the University of Akron on Thursday, also expressed confidence that the central bank can manage to tame inflation without derailing the economy.

“Our intent is to reduce accommodation at the pace necessary to bring demand into better balance with constrained supply in order to get inflation under control while sustaining the expansion in economic activity and healthy labor markets,” Mester said.

(Updates with comments from Harker in 13th paragraph.)