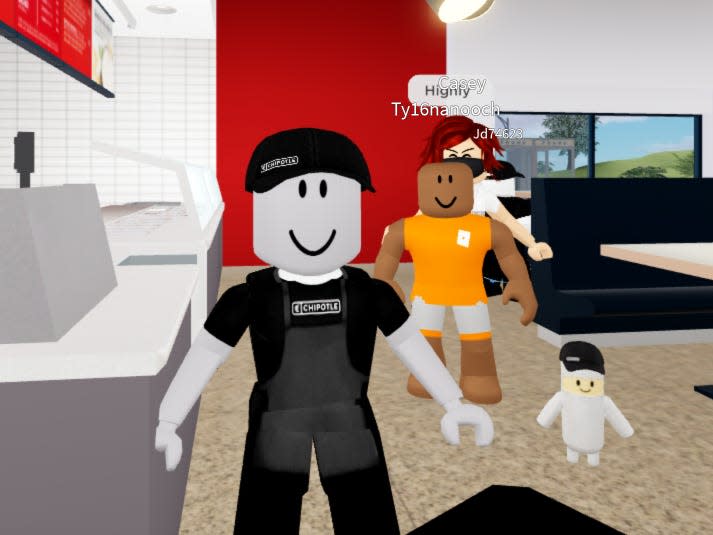 Chipotle recently launched its second foray into the metaverse in Roblox, so I decided to visit and see what it was really like.

I’ve never played Roblox before, so I was prompted to make an account.

Roblox is a free gaming platform with over 100 million active users, many of whom are children.

I’m not much of a gamer, but I was able to install the game in about five minutes by following some easy instructions.

I preemptively closed Slack and Photoshop, correctly anticipating that Roblox would have my computer’s fan going into overdrive.

As soon as the game opened, a text bubble informed me that I’d been dropped outside of the first Chipotle in 1993.

There were shortcuts to see the leaderboard of other players, emotes I could use, and inventory, though I didn’t have any yet.

The intersection where I was dropped leaned heavily into the ’90s aesthetic, with a “Burritobuster” stylized like Blockbuster across the street from Chipotle.

I was assigned an avatar with red hair and a denim jacket.

The red arrows pointed me towards Chipotle, and I quickly realized I could move using the arrow keys.

The Chipotle looks notably different from the restaurant’s style today, true to the original location.

The little details really hammered home the idea that I was transported back in time — especially the payphones on every corner.

After exploring outside a bit, I followed the arrows to go inside Chipotle.

The interior looked more familiar to me, like any other Chipotle I’ve been inside.

I made my way to the Chipotle worker at the cash register, who told me I was also part of the crew.

I noticed other players around me had customized outfits, like the minion pants on the player behind my Chipotle coworker.

Next, it was time to play the burrito builder game, which Chipotle has promoted as a highlight of the Roblox installation.

The game fits its “burrito builder” name. Customers come up to the counter and show small pictures of ingredients they want in their burritos, which you must drag onto their moving tortilla before it gets to the end of the line.

Once the ingredients are added, use the arrow keys to roll up the burrito.

I got through four burritos before I failed, but I earned some burrito bucks for my trouble.

I also briefly made it onto the leaderboard of my server.

After I exited the game, my Chipotle coworker directed me to the pickup shelf for another game.

I grabbed my backpack from the pickup shelf, starting the five-minute timer for the next game.

The game is all about delivering burritos to customers’ homes, a major part of Chipotle’s business in recent years.

I stepped outside in my newly-acquired Chipotle uniform.

The backpack comes with a map that shows photos of five destinations where burritos must be delivered.

The objective is to deliver the burritos to the right locations before time runs out.

The town surrounding the virtual Chipotle has a few blocks of houses, apartments, and stores to search for deliveries.

At first, I didn’t do very well at the game, because many of the houses look similar.

Eventually, I figured it out, and it was a moderately fun way to kill a few minutes.

The games are all about accumulating prizes and burrito bucks, which can be exchanged for other items in the game. Some players can also win a free burrito at a real Chipotle.

I won this little “burrito buddy” for the deliveries.

Then, I talked to the cashier, where I learned that burrito bucks can be exchanged for in-game advantages.

I explored a bit around the kitchen in the back of house.

I wandered back into the walk-in refrigerator, where renderings of all of Chipotle’s ingredients were stacked on shelves.

There was a light in the middle of the refrigerator with the option to teleport, the most unexpected part of the Roblox world for me so far.

I landed in an outdoor area that I quickly realized was Chipotle’s previous Roblox promotion from Halloween.

I walked around the corn maze a bit.

Then, I talked to the skeleton host, who told me I could wear a Chipotle-themed Halloween costume.

Although there were several options, I couldn’t resist the mummy burrito look.

I wore my new costume into the second Metaverse Chipotle, this one a more modern design.

After spending time exploring Chipotle’s metaverse restaurants and playing all the available games, I didn’t understand the appeal any more than I had before.

The games were fun for a few minutes, though I don’t think I’ll go out of my way to play again.

I don’t really understand what Chipotle gets out of it, though, or why I as a customer should come back and play again.

Roblox is primarily popular with children, who don’t necessarily have the buying power or access to buy Chipotle themselves.

Talking and thinking about burritos made me a bit hungry, but I didn’t feel compelled to head to Chipotle after I logged out.

Quick service restaurants like Chipotle, Wendy’s, and others are popular in large part because of their convenience and relative affordability.

Metaverse restaurants by their nature can’t replicate these features, and I don’t see them catching on with typical consumers any time soon.

Do you have a story to share about a retail or restaurant chain? Email this reporter at mmeisenzahl@businessinsider.com.