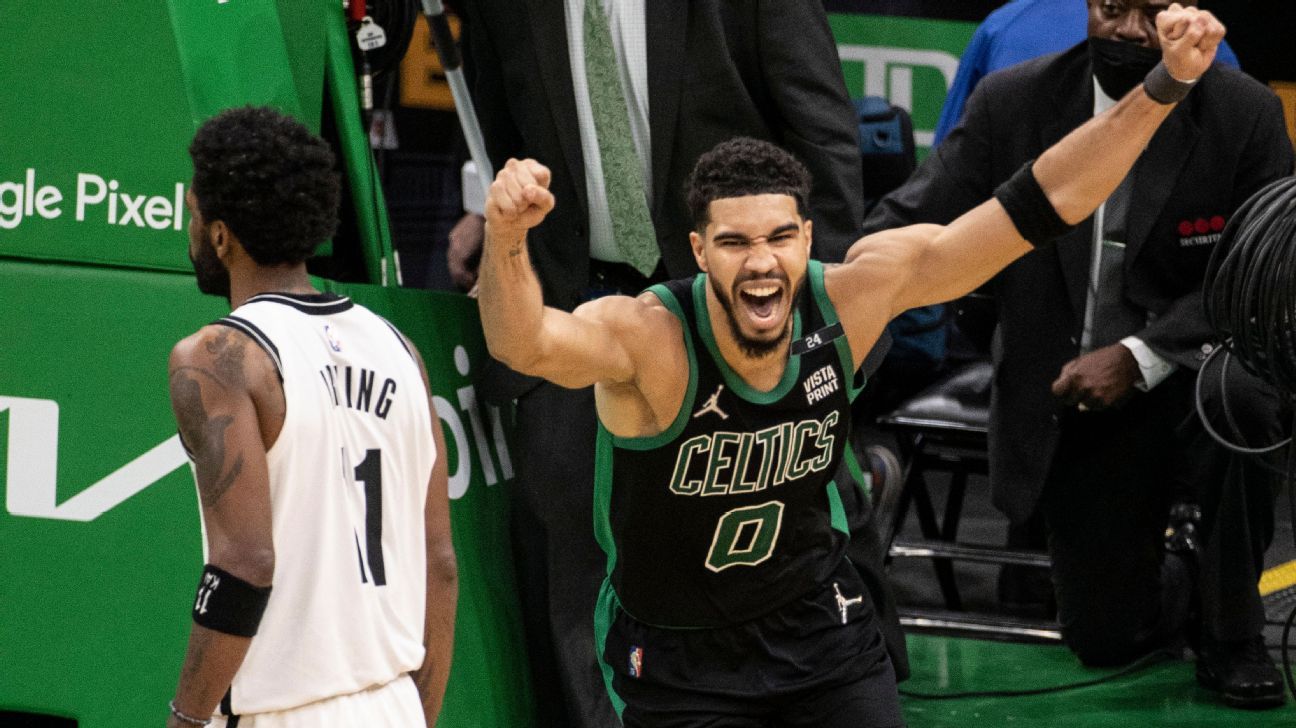 BOSTON — Jayson Tatum has been adamant he didn’t view the Boston Celtics’ matchup with the Brooklyn Nets as a chance to prove anything opposite two of the league’s elite scorers.

His finish in Game 1 said otherwise.

Tatum made a layup at the buzzer on a pass from Marcus Smart to give Boston a dramatic 115-114 victory over the Brooklyn Nets on Sunday in Game 1 of their first-round playoff series.

“When he took that dribble we just kind of made eye contact. He made a great pass,” Tatum said. “It doesn’t get any better than that. A buzzer beater in a playoff game at home.”

Tatum scored 31 points, the last two on the first buzzer-beater of his career. It was Boston’s first in the postseason since Paul Pierce in 2010 against the Miami Heat.

Tatum’s bucket came after a positioned Boston possession in the frantic final seconds. Kevin Durant missed on the other end, Boston rebounded and raced up the court, electing not to call a timeout.

Jaylen Brown dribbled toward the middle and swung the ball out to Smart. He fired it into a cutting Tatum, who spun around and dropped in his layup just before time expired.

“I’ve always been told you have more time than you realize you have,” Smart said. “I was about to throw it to Al (Horford) off the dribble and I saw JT cut at the last minute.”

All five Celtics touched the ball on the possession.

“I think that’s kind of a microcosm for our season, guys moving the ball being unselfish,” coach Ime Udoka said.

Dating back to last postseason, Tatum has four straight 30-point games in the playoffs, matching Larry Bird in 1987 for the longest streak in Celtics history.

Brown added 23 points. Horford had 20 points and 15 rebounds, and Smart finished with 20 points, including four 3-pointers.

Kyrie Irving finished with 39 points, including 18 in the fourth quarter. But the Celtics forced the ball out of his hands the last time Brooklyn had it and Durant missed a jumper with a one-point lead that set up the Celtics’ final possession.

“They did a good job of forcing me away, then helping in the paint. I just got to be more fundamental in my moves,” he said. “I feel like some shots went in an out for me.”

Boston charged out of halftime with a 23-8 run to open a 82-69 lead, sparked by Smart’s dead-eye shooting from beyond the arc.

The Celtics also seemed to tweak their approach to guarding Durant in the half court, fronting him and sending help over the top to limit his driving ability.

Durant and Irving still found ways to score, but they had to exert increased energy to get off their attempts.

With Boston leading early in the fourth, Irving got Brooklyn back in the mix with two straight 3-pointers and a layup to trim Boston’s advantage to 98-97. Then, following an empty trip by Boston that saw Brown and Horford fail to convert from in close, Durant calmly drained a 3 on the other end.

Brooklyn had increased its lead to 107-102 when Durant was long with a jumper. Brown found space on the Celtics’ next possession and connected on a 3 from the wing. The Nets turned it back over on an offensive foul on Durant. Smart then slide underneath Irving on Boston’s ensuring trip and tied it.

The score was tied again at 109 with less than 2 minutes left when Durant got a friendly bounce on a jumper. Horford’s follow shot tied it again. But Irving was good from deep on the next time down the floor give the Nets a 114-111 cushion.

In his latest trip to face his former Boston teammates, Irving received the loudest jeers during pregame introductions and was booed whenever he touched the ball the rest of the way.

Fans also showered plenty disdain on Bruce Brown, who made headlines last week after suggesting Celtics big men Horford and Daniel Theis might be easy to attack inside without injured center Robert Williams III available to defend the rim.

Horford played the opening 12 minutes as if on a one-man mission to obliterate that notion.

Boston entered with the league’s best defensive rating since the All-Star break and applied early pressure on Durant. He tried to establish himself in the post in the first quarter, but the Celtics blitzed him with backside help defenders, stripping him three times.

Brooklyn finished with seven turnovers for the quarter, but it translated into only a 29-28 lead for Boston.

Horford was active throughout, going 3-for-4 from the field with 10 points, two rebounds and a steal.

Boston had to adjust early in the second quarter after Theis picked up his third foul. But things evented out when Drummond was whistled for his fourth foul with 4:58 left in the period.

The Celtics immediately went on a 9-2 run before the Nets clawed back to tie the game up at 61 at the half.

“Stayed with it, took their shot and found a way to finish the game,” Horford said. “End of the day it’s just getting the win, it doesn’t matter how it was.”

ESPN Stats & Information and The Associated Press contributed to this report.