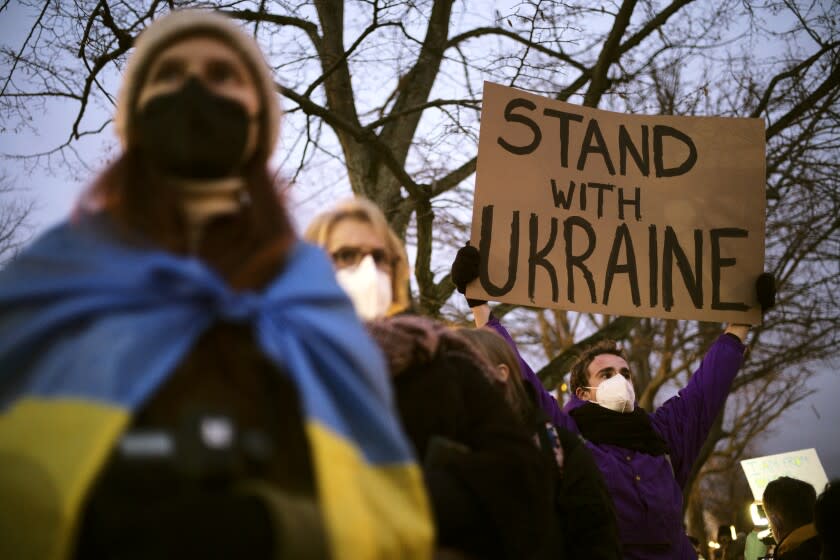 René Herrmann resorted to a radical step to grab the most attention.

As he joined a convoy organized to protest anti-Russian sentiments, he affixed onto the hood of his vehicle a sign emblazoned with the Star of David.

“What used to be the evil Jew [during Germany’s World War II Nazi era] is now the evil Russian,” he said. “Russophobia is everywhere.”

Since the Russian invasion of Ukraine, there have been protests worldwide against Moscow’s actions, and certainly in Germany, where activism abounds in places like Berlin. The rise in voices against Russia has led to some Russian bashing. But it is no secret that many of the more than 2 million migrants from the former Soviet Union who now live in Germany are strong supporters of Vladimir Putin. And they’ve never been shy about publicly expressing their support.

It’s being overtly expressed in the appropriation of the Star of David — widely recognized as a symbol of Judaism and Jewish identity — in much the same way people against COVID-19 vaccine and mask mandates have used the symbol and the Holocaust to express outrage at the mandates they label as fascism that harkens back to Nazi Germany. German Nazis forced Jews to wear the symbol to mark them as enemies and less than, rounded up and taken to concentration camps, where millions were killed during World War II.

While the use of the Star of David — or the Holocaust — in such a manner is viewed as offensive, it is not the only symbol the pro-Russia crowd in Germany has adopted. In addition to huge Russian national flags, the letter Z seen on Russian tanks and trucks in Ukraine — which stands for za pobedu [“For victory”] — and the letter V for sila v pravde [“Our strength is in truth”] are also ubiquitous at these rallies. Many protesters also carry the black-and-orange ribbon of Saint George, a symbol of the victory in World War II and Russian military glory. In Berlin, anyone who displays these symbols is subject to a fine or prosecution.

Herrmann, who is German — not of Russian ancestry — runs a car dealership in Berlin’s east side. He said he has not personally experienced anti-Russian bashing, but that the internet is filled with such stories.

Since the start of the war, more than 500 criminal acts linked to discrimination against Russians, Ukrainians now living in Germany, and supporters on either side of the divide, have been reported to authorities. They’ve mainly included property damage and seizures. These encounters are also reflected in entries on the website of the Russian Embassy in Berlin, where people can report such incidents. However, the anonymous reports are all minor and at times difficult to verify.

“We must be very careful that this war does not spill over into our society,” said Nancy Faeser, Germany’s interior minister. “This war must not be fought on the backs of Ukrainians or Russians in Germany.”

Just a few days ago, a Soviet war memorial in Berlin was smeared with graffiti. The graffiti read, “Ukrainian blood on Russian hands” and “Putin = Stalin.”

Although the offenses so far remain small in scale, they are fodder for Moscow’s supporters. A Telegram channel called “Putin Fanclub” counts nearly 33,000 subscribers. Other, similar channels such as the “News from Russia,” have more than 127,000.

“The elitist idiots never learn from history, the more pressure is put on Russia, the stronger the cohesion of the people,” one message reads.

Among the Germany-based Putin backers, the war is regularly referred to as the “liberation of Ukraine.” Right-wing platforms such as the far-right Compact Magazine hail German-Russian friendship.

“If there is one lesson from history, it is this: Germans and Russians must never again allow themselves to be set against each other,” said Jürgen Elsässer, editor in chief of the magazine. “There are arsonists in Kyiv who want to drag the whole world into the abyss to save their regime.”

All of these groups play to existing anti-American, anti-NATO and anti-Western sentiments.

“The mindset of the radical right is entirely on the same anti-Western course as Putin,” said Matthias Quent, a researcher at the University of Applied Sciences in Magdeburg and one of the best-known German researchers in the field, who sees a lot of overlap with other groups.

“When Russian flags fly at anti-COVID rallies in Saxony, or when protesters march in front of the Russian Embassy and then shout slogans like ‘Putin liberate us,’ there’s clearly an intersection of interests.”

“Polarization is definitely increasing,” Quent said. “By many the ban of RT is seen as evidence that they are in fact telling the truth.”

Reports of Russophobia fall into the same pattern.

“When incidents, real or fake, are reported, they immediately go viral on social media,” he said. “In the end, no one knows what is really going on.”

Whether the incidents are based on fact or fiction, the rifts in society are growing deeper.

With new convoys and protests staged in German cities recently, the question remains: Why is there still a vocal minority adopting a pro-Russia line? Many of them are of German ancestry. They left the former Soviet Union because they felt like strangers there and wanted to return to their homeland.

“But here in Germany they were seen as Russians, not Germans. At some point, they started thinking, ‘All right, if we’re seen as Russians, we’ll act like it,’” said Vladimir Kaminer, one of the best-known contemporary Russian writers, who has lived in Berlin for more than 30 years. “When you lose your social status, you quickly develop an inferiority complex.”

One way to compensate is to take on the role of victim, says Kaminer, who has long engaged in German-Russian soul-searching.

When the phone rings in the home of a 75-year-old historian in Detmold, North Rhine-Westphalia, Russian radio can be heard in the background. Of German descent — he declined to be identified out of privacy concerns — his family moved from Kazakhstan to West Germany in 1983. Asked about his feelings toward Russia, he quickly takes a stand.

“The West supports the bandits in Kyiv,” he said. “With the eastward expansion, NATO broke its promises to Russia. Russia was in danger and had to defend itself.”

Everything he says seems to come straight from the Kremlin’s playbook. Addressing the hundreds of Ukrainian civilians killed in Bucha, some shot with their hands tied behind their backs, he maintains a firm voice.

“They’re all actors,” he said. “And so is their president. They can’t be trusted.”

A week into the Berlin convoy, Herrmann regretted putting the Star of David on his vehicle.

“The police fined me, and that’s OK,” he said dryly.

When asked if he will organize another protest, without question he will, he said.

“I’ll just wait until after May 9, when Putin’s victory parade in Red Square is over.”

Ziener is a special correspondent.