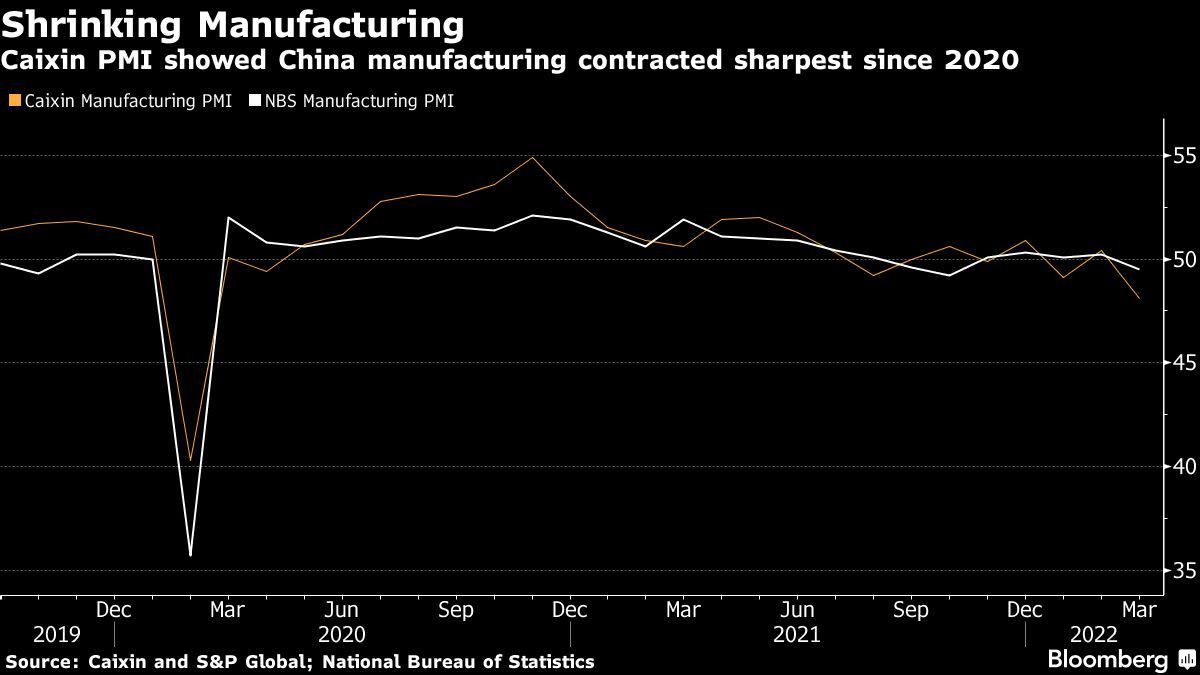 The fastest inflation in decades and the resulting rush by central banks to raise interest rates are stoking recession fears in financial markets — worries that are being compounded by the impact of aggressive coronavirus lockdowns in China and the war in Ukraine.

In the last week alone, the the US and UK logged inflation accelerating the most since the early 1980s and the central banks of Canada and New Zealand provided a model for the US Federal Reserve and others by hiking rates 50 basis points for the first time in 22 years.

Bank of America Corp. reported fund managers were the most bearish they’d ever been about the outlook for growth and JPMorgan Chase & Co. boosted its reserves to insulate itself against an economic deterioration.

Meantime, Sri Lanka and Pakistan fell deeper into crises as the United Nations warned of a “perfect storm” for developing countries as commodity prices surge, the World Trade Organization cut its outlook for commerce and searches for “recession” on Google and the Bloomberg Terminal spiked.

Against such a backdrop, policy makers head to Washington this week for meetings of the International Monetary Fund and World Bank. The Fund is already saying the war means it will downgrade its forecasts for 143 economies this year — accounting for 86% of global gross domestic product.

“We are facing a crisis on top of a crisis,” said IMF Managing Director Kristalina Georgieva.

“For the global economy, the combined impact of war and coronavirus will be a year of lower growth, higher inflation and elevated uncertainty. To get to recession, we’d need to see further shocks. Russia cutting off Europe’s gas supply or China’s lockdown expanding from Shanghai to other major cities are possible catalysts.”

But there are also reasons to think resilience, albeit with a touch of stagflation rather than global recession, may be the order of the day, at least for rich nations.

Thanks to pandemic-era stimulus, households in developed markets still have 11% to 14% of income in savings, according to a JPMorgan Chase analysis sent to clients last week.

Leverage is at multi-decade lows and income is advancing at an annual rate of about 7% amid tightening labor markets, catalysts for a potential rebound in the second half of the year. In the US, reports last week on retail sales and consumer sentiment offered hope all consumers aren’t pulling back despite price shocks.

“I see more reasons for the global economy to slow than for it to re-accelerate,” said Stephen Jen, who runs Eurizon SLJ Capital, a hedge fund and advisory firm in London. “However, whether it will fall into a recession is a whole different story, simply because the abatement of Covid around the world should unleash huge pent-up demand, helping to offset a good part of the headwinds.”

Still, that robustness is going to be tested.

The fastest inflation in decades around the world is already starting to turn off many consumers, especially those witnessing higher food and fuel bills. About 84% of Americans plan to cut back on spending because of higher prices, according to a Harris Poll for Bloomberg News.

Central bankers are also pushing up interest rates with the Fed now more likely than not to boost its benchmark by a half-point next month for the first time since May 2000 and start reducing its portfolio of bonds. Chairman Jerome Powell is expected to address the outlook in an appearance on Thursday.

One danger is that policy makers flip from reacting too late to rising inflation to tightening too much as their economies weaken or if inflation turns out to be driven by supply chain woes that monetary policy can’t address. The fund managers surveyed by BofA saw an 83% risk of a policy error.

“The reason we’re looking at much slower growth is that central banks need to respond by tightening policy from its currently very easy state such that financial conditions will tighten and that will restrain demand,” said Karen Dynan, Senior Fellow at the Peterson Institute for International Economics.

In a precursor of the IMF’s new economic outlook to be released on Tuesday, Dynan estimated global growth will slow to 3.3% this year and next, compared with 5.8% in 2021.

The big advanced economies will expand only moderately this year and weaken further in 2023, she said. Large emerging markets face a “divergent” outlook with India improving and China grappling with lockdowns and a property downturn.

The pace of developments this year has caught policymakers off guard.

Russia’s invasion of Ukraine has overshadowed a deepening slowdown in China as the government continues with its “dynamic zero” approach to controlling Covid-19, a policy that has stalled production in manufacturing and financial hubs Shenzhen and Shanghai and kept millions of people at home.

That approach, however, is likely to push growth down to 5% this year, below the official target or around 5.5%.

Global supply lines that were still recovering from the pandemic may also suffer a further setback if China doesn’t control the virus soon.