Shopify (SHOP -8.62%† reported its first-quarter results on Thursday, and the numbers were nothing short of awful. Not only were sales numbers uninspiring, but the company also incurred a loss of well over $1 billion.

As a result of the performance, the stock became the latest tech giant to crash more than 15% upon the release of its earnings. What went wrong for the e-commerce company, and is this a reason for investors to worry? 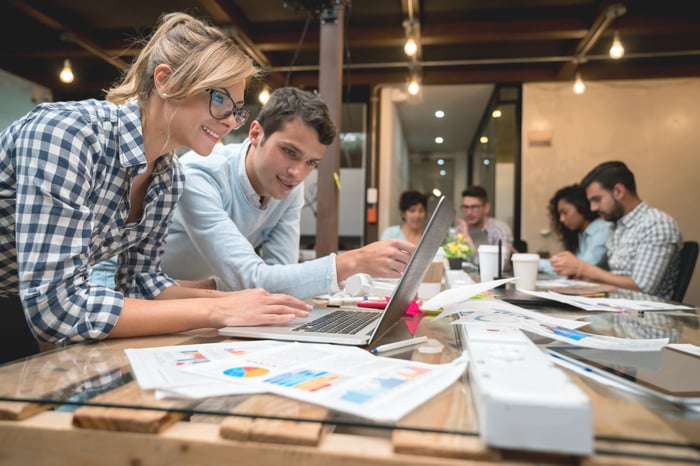 Sales growth was down sharply in Q1

During the first three months of 2022, Shopify’s revenue totaled $1.2 billion and grew at a rate of 22% year-over-year. While that’s impressive, that’s a much smaller growth rate than what was seen a year ago in the first quarter of 2021, when Shopify’s sales more than doubled, rising by 110%.

To Shopify’s credit, it did warn investors that a slowdown would happen in February when it released its year-end results. Although the company didn’t provide a specific forecast, it cautioned that its revenue growth rate this year would not be as high as the 57% seen in 2021.

Business still grew in Q1 at a decent rate, especially given that the global economy has been ravaged by a series of headwinds, from supply chain issues, inflation, lockdowns in China, and the war in Ukraine.

But it’s important to understand that the decline in Shopify’s growth rate only tells part of the story. The larger problems lay beyond the top line.

Expenses grew at a much faster rate than revenue

Shopify’s slowing sales growth was compounded by the fact that the business was incurring more expenses along the way. Here’s a quick breakdown of how the company went from generating profit a year ago to reaping a significant loss this past quarter:

Operating expenses of $735.6 million were 67% higher than the $439.8 million that the company incurred in the prior-year period. It can be a recipe for disaster when costs grow at a higher rate than revenue. While Shopify has been investing more into its business amid pandemic-fueled growth, these expenses are now proving to be problematic. In the first quarter, operating expenses were 61% of revenue,whereas a year ago, they were just 44%.

The biggest swing in the company’s earnings report came outside of its core operations. Other income and expenses were negative $1.6 billion this year, compared with a $1.3 billion gain a year ago. The good news for investors is that this is due to an unrealized loss on equity and other investments. The loss could swing back into the positive in the future. For now, it’s not impacting the company’s cash position, as Shopify’s cash burn for the three-month period was just $53.6 million.

Shopify continues to invest in fulfillment

In the company’s earnings release, Shopify also announced the acquisition of technology company Deliverr. Through Deliverr’s management software, Shopify can help merchants with logistics and manage supply chain complexities. Valued at $2.1 billion, Shopify will fund the transaction primarily through cash (80%), and the remainder in shares.

While that could help accelerate Shopify’s future growth, the challenge will be that this could mean more costs in the short term as the company integrates Deliverr and works to eliminate redundancies and inefficiencies throughout the process.

Should investors buy the dip?

As a result of the sell-off this week, Shopify fell below $400, a new 52-week low for the stock. The last time it reached these lows was during the early stages of the pandemic, in April 2020.

For long-term investors, buying the growth stock now could present an attractive opportunity. According to estimates from Grand View Research, the global e-commerce market remains booming, and will grow at a compounded annual growth rate of 14.7% until 2027. Shopify’s growing presence in the space could make its price today look like a steal in the future .