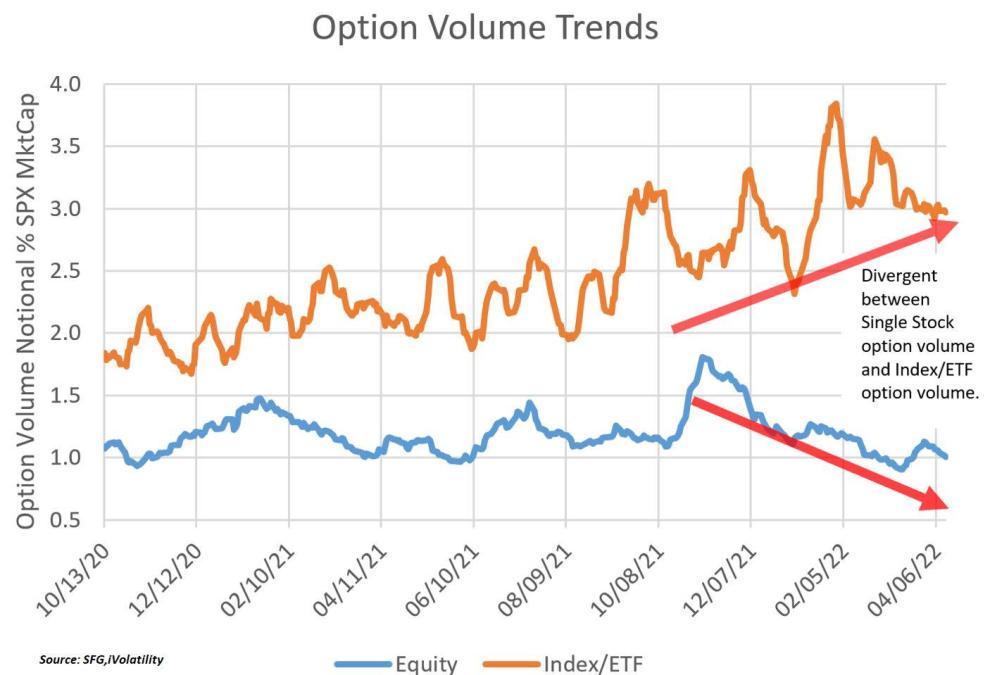 (Bloomberg) — Inflation is surging, central banks are on the move and now it’s earnings season. To top it all off, stock traders face the market-roiling potential of a monthly options expiration estimated at more than $2 trillion.

Roughly $495 billion in single-stock derivatives are set to expire Thursday, with another $980 billion of S&P 500-linked contracts and $170 billion in options tied to the State Street fund tracking the S&P 500 all running out as the holiday-shortened weekends, according to estimates from Goldman Sachs Group Inc.’s Rocky Fishman. Such volumes have been a source of volatility in the past year.

While nothing is ever assured in markets, indexes have exhibited a consistent pattern of declining on days when contracts are closed out. This time around, it comes as stocks are suffering through yet another bout of volatility, with the S&P 500 notching only four positive days since the start of the month.

It isn’t out of the ordinary to get a monthly expiration on a Thursday in April, but other “wrinkles arise because it can coincide with tax day and the start of earnings season, both of which we’re getting now,” said Steve Sosnick, chief strategist at Interactive Brokers LLC. The deadline for Americans to file their tax returns is April 18.

With monetary and fiscal support receding, investors have been craving down — and the mood has turned gloomy. A survey by Bank of America Corp. showed fund-manager optimism about global growth is at a record low. The greatest number since 2008 are predicting a stagflationary period of lower growth and still-high inflation. Sentiment is “poor,” said the bank’s strategist. Managers remain in the “’sell-the-rally’ camp,” and view previous selloffs as just an “appetizer.”

Others are dialing back their optimism. JPMorgan Chase & Co.’s Marko Kolanovic, once a steadfast bull, said investors who previously raised stock holdings should now take profits and shift some money to government bonds. Truist Advisory Services’ Keith Lerner downgraded his view on equities, cutting them to neutral from attractive, while saying that the range of potential economic and market outcomes was “unusually wide.”

A cautious stance is prevalent in single-stock data, too. The 20-day average of Cboe’s put-call volume ratio for single stocks has risen from a four-month low, showing an increase in moves to hedge against price drops. Meanwhile, the Cboe Volatility Index, a gauge of prices on S&P 500 options, has swung wildly this month, from as low as 18.6 to as high as 24.37. It was in the middle of that range as of 3:50 pm Wednesday.

“Given the backdrop of political uncertainty and supply-chain issues, I think it’s not an easy time, particularly for the equity markets,” Katy Kaminski, chief research strategist at AlphaSimplex, said in a phone interview. Inflation, for instance, “has more room to run than most people would like to think. They keep thinking everything is just going to go back to normal and I think it could take quite a while.”

Mushrooming options volume has been a regular feature of post-pandemic markets. Bullish options contracts became a favorite tool of retail traders who spent the Covid lockdowns trading from their phones. Now, amid choppier markets, demand for bearish options has been growing. Contracts tied to declines in State Street’s S&P 500 ETF and the iShares iBoxx High Yield Corporate Bond ETF have started to rise again, with put open interest on the high-yield fund surging.

To be sure, Chris Murphy, co-head of derivatives strategy at Susquehanna International Group, said there is now likely to be less single-stock impact than in the day-trading frenzy of the past two years. Investors who bought puts in January and February when the market was selling off are way out of the money now, he said, which could mute the impact of expirations on market moves.

His team says a total of 85 million US-listed option contracts are set to expire Thursday, an 8% decrease from a year ago. Single-stock contracts are down 12% year-over-year. “We are seeing a lot less of the meme stock trading compared to last year, that’s the major culprit,” Murphy said.

Meanwhile, index and ETF contracts increased 7% and 3%, respectively, versus year-earlier levels. “This is likely due to more of a focus on the macro environment and more hedging,” he said.