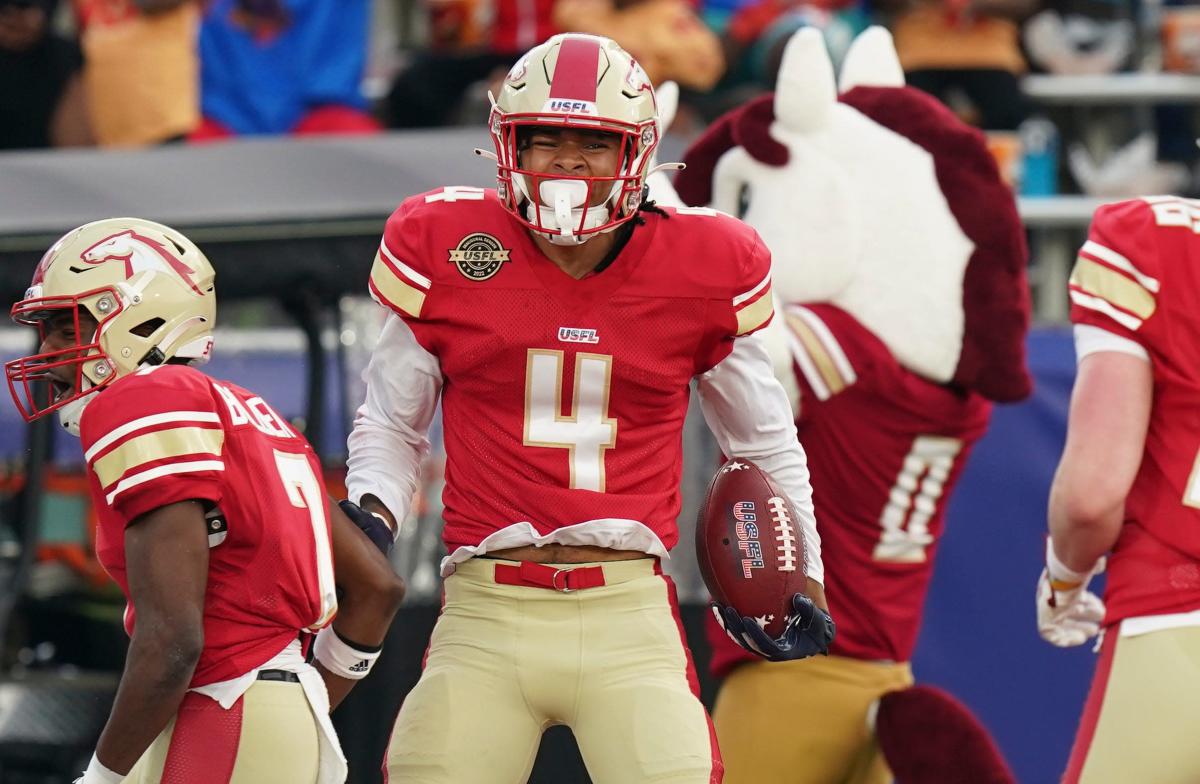 The United States Football League jolted back to life Saturday, decades after the original USFL’s three-year run. The inaugural contest pitted the New Jersey Generals against the Birmingham Stallions, with the Stallions going on to win a thriller, 28-24.

Here are three takeaways from the spring league’s first game:

Big names … just not on the field

The natural problem all start-up football leagues face is that the top talent is in the NFL. That leads to a cap to the quality of football on display, and that was evident at times throughout Saturday’s game.

Beyond a few players that might cause the ardent college football watcher to go “Oh, that guy!” — there was a Scooby Wright III sighting this game — the most identifiable people on the field might have been the coaches: Mike Riley (Generals) and Skip Holtz (Stallions) should be familiar names to college football fans.

But off the field, the presentation was top notch. Curt Menefee and Joel Klatt called the action for Fox (the game was also simulcast on NBC). As you’d expect of the two longtime Fox employees, they did a professional job and treated the action with the respect it deserves — even if it’s not the NFL or the biggest college football game of the week, guys are putting their bodies on the line for our entertainment, after all.

Former Dallas Cowboys head coach Jason Garrett also made his debut as a TV analyst for NBC, appearing pregame and at halftime.

Fox used a wide variety of cameras, including neat skycam shots done via drone and the “helmet cam,” which took you right into the chaotic heart of the action.

In the third quarter, Riley spent a considerable amount of time mic’d up, which lent interesting insight into what football coaches are doing on the sideline.

All-in-all, it was a solid broadcast.

Even if it might not have been the highest of quality, a big plus for the USFL’s debut: It’s still football!

What, are you going to pretend like every NFL game is good? Football is a deeply strange game, and beauty can be found in the sport’s goofy moments — like a guy getting a sack with a floss pick in his mouth.

But that’s not to say there weren’t some spectacular plays.

Randy Satterfield opened the scoring for the Generals with a great catch, absorbing a huge blow to maintain the touchdown.

On the ensuing possession, Birmingham’s Osirus Mitchell pulled in a touchdown with a brilliant one-handed catch.

The game even had an exciting finish: the Generals’ Nick Rose, after missing twice earlier in the game, hit the go-ahead, 47-yard field goal with 1:54 to go. But the Stallions marched down the field and scored the game-winning touchdown on a scramble by quarterback J’Mar Smith with just 23 seconds to go.

Perhaps one of the players who took the field Saturday will be one of the stars that emerges in this league and gets a crack at the NFL. It happened for PJ Walker, who rode a standout run as a quarterback in the XFL into work with the Carolina Panthers.

One location an odd choice

Birmingham was the host for this contest — and technically will be for every game the USFL plays.

Protective Stadium and historic Legion Field will be the sites for all the regular-season games the league plays before playoff action moves to Canton, Ohio.

Saturday’s game at Protective Stadium — actually involving the team from Birmingham — did not appear to be completely packed.

That doesn’t seem like the greatest sign for the league. Is the appetite there amongst the fine people of Alabama for multiple USFL games a day? Will any fans of other teams actually travel to Birmingham to watch the “hometown” team play? Will the one-location structure of this league prevent fans from latching onto the product entirely?

The XFL had multiple cities draw over 17,000 fans in Week 1 early in 2020 and appeared to have a solid thing in the works before the onset of the COVID-19 pandemic shuttered the league. The previous year, the Alliance of American Football folded amid financial problems.

Time will tell if the revamped USFL will succeed, but for at least one day it helped satisfy that football itch.

This article originally appeared on USA TODAY: USFL first game takeaways: What we learned from Generals vs. Stallions