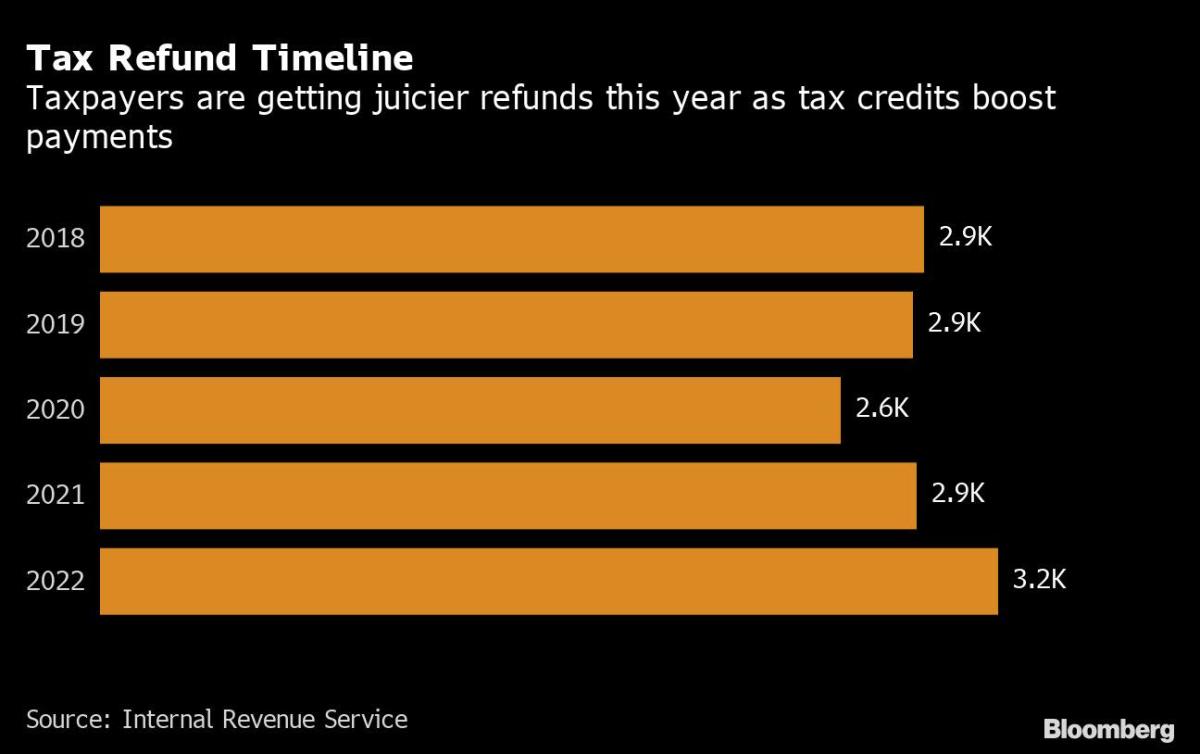 (Bloomberg) — The 2022 tax season, predicted by some to be a perfect storm, is coming to a close with barely a stiff wind.

For the first time in three years, the scheduled deadline — April 18 — will be met, as the Internal Revenue Service ended up largely being able to manage processing the millions of individual returns despite continuing complications from the pandemic. Delayed due dates for 2020 and 2021 returns had sown confusion for taxpayers and created a last-minute chaos within the IRS to update systems.

“For most taxpayers who have fairly simple taxes, and they e-file and they choose direct deposit, that process — for the most part — has been very smooth,” said Mark Jaeger, VP of Tax Operations at TaxAct, a tax prep software company.

It’s a big contrast with the picture in January, when Treasury officials warned to gird for a challenging and frustrating season, with processing delays and customer-service shortages. A shift in how the child tax credit was administered in 2021, with half of it distributed in monthly payouts, meant some might have seen smaller refunds than past years.

The average refund so far for 2021 is $3.175, 9.9% higher than in 2020. That’s likely the result of several credits that were expanded under President Joe Biden’s $1.9 trillion American Rescue Plan.

One surprise for many: an increasing attention by the IRS to transactions in digital currencies and non-fungible tokens. While a law requiring notification to the IRS of transfers of at least $10,000 in cryptocurrency doesn’t take effect until 2023, the agency does have reporting requirements for acquisitions and sales on individual returns.

This is surprising many new crypto owners who don’t yet realize that the IRS asks for the data, Mike Greenwald, a partner at accounting firm Friedman LLP, said.

“It requires a conversation that clients weren’t expecting to have,” Greenwald said. “They don’t think about digital currencies the same way the IRS does.”

More broadly, those who’ve participated in the the kind of retail trading popularized by Robinhood are finding the need to account for how they’ve fared.

Nicole Rosen, a Washington-state based tax preparer, has noticed a significant increase among her clients of people using services like Robinhood to buy and sell stock. That requires additional forms and adds to the complexity of the tax returns.

In the past, about one-third of the returns Rosen prepared reported stock transactions, she estimates. Now, that’s closer to 80% to 90%. The average time to complete a return has accordingly increased from taking as many as two hours to as much as four. New automated IRS tools, such as a platform to upload power-of-attorney paperwork, have helped save time in other areas, Rosen said.

The IRS has been working hard on its own paperwork. The backlog of paper returns reached a high-water mark of 24 million this year. IRS Commissioner Chuck Rettig has said that should be reduced to the normal levels of less than 1 million by the year-end.

With less catch-up work to focus on, the IRS could now be in better position to step up audits of the wealthy, as advocated by progressive Democratic lawmakers.

The IRS recently got approval for an expedited hiring process to bring on as many as 10,000 new employees, with half of those being hired in the coming months. Rettig has said this will help improve customer service and speed up processing times.

“IRS employees want to do more to help taxpayers,” Rettig said in testimony to the Senate Finance Committee this month. “We want to be able to answer the phones and respond to questions.”

Tax professionals, who are scarred from the past two years helping their clients navigate ever-changing pandemic payments, Paycheck Protection Program loans and unemployment benefits, are wary of jinxing the possibility of easier tax seasons ahead.

“We’re hopeful that there aren’t going to be any changes that are going to create the mechanical chaos that’s been going on over the last couple of years,” Bret Scholl, a California-based CPA, said. “But while things are so fluid and unpredictable I’m hesitant to predict just about anything.”