The semiconductor sector has benefited from a major demand surge thanks to the continued digitization of everyday life. The pandemic undoubtedly accelerated that trend with remote work driving sales for consumer electronics, and data centers growing hungrier for processing power as more companies shift operations online.

Advanced Micro Devices (AMD 1.57%† is a best-in-class producer of advanced computer chips for a diverse range of purposes, and it has a star-studded list of customers filled with household names.

AMD stock has declined by 44% over the last six months amid the broader tech sell-off, and the first-quarter 2022 earnings report it just released offers more reasons to own it for the ultra-long term. From the consumer to the data center, and beyond

While AMD is a dominant player in the semiconductor space right now, it predicts a seismic shift in the way hardware is used over the next decade. At the moment, the company produces advanced central processing unit (CPU) and graphics processing unit (GPU) chips which are designed, manufactured, and sold to the end user. When new technology is developed, AMD updates that hardware by producing an entirely new line of chips, and if the end user wants the latest iteration, they have to swap out their existing hardware.

AMD thinks adaptive computing is the next frontier, and it’s the reason for its acquisition of Xilinx, a powerhouse in that segment. Adaptive computing describes hardware that is reconfigurable even in a live production environment. Typically, end users purchase chips that meet their needs and are beholden to the evolution of that technology, but with adaptive computing, hardware is instead reconfigured as those needs change.

AMD spent $49 billion on its acquisition of Xilinx, which just closed in the first quarter of 2022.

But in the here and now, AMD powers some of the hottest consumer tech, particularly in the gaming industry. The company’s chips can be found in both Microsoft‘s (MSFT -0.95%† Xbox and Sony‘s (SONY -1.50%† PlayStation 5 gaming consoles, in addition to personal computers all over the world. But in 2021 the company closed another high-profile deal, this time with electric vehicle industry leader Tesla (NASDAQ: TSLA)to power the infotainment systems in its flagship cars.

Soaring growth, with more to come

Helped by a $559 million contribution from newly acquired Xilinx, AMD generated a record revenue result in Q1 2022, not just overall but also within specific segments. 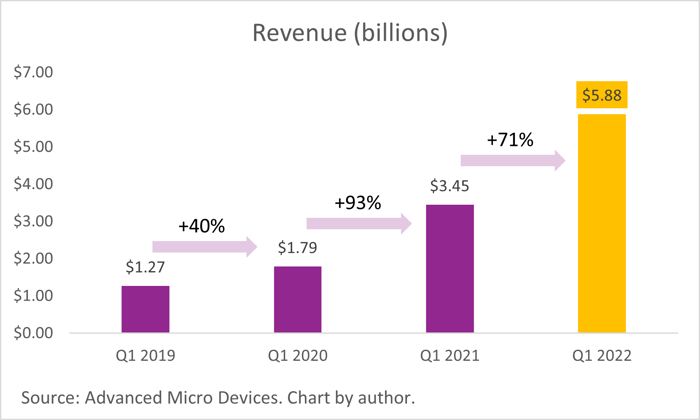 In Q1 2022, total revenue grew 71% year over year, but it soared 88% in AMD’s second-largest segment, Enterprise, Embedded, and Semi-Custom. It speaks to the demand from cloud computing players, and AMD also noted particular strength from Xbox and PlayStation 5 consoles.

Over the last two years, the pandemic environment triggered shortages of advanced chips, which allowed producers like AMD to increase prices because buyers had few other options. It led to a much higher gross margin, which came in at 48% in Q1 2022, up from 46% in Q1 2021, and 41% in the pre-pandemic Q1 2019.

More revenue plus higher margins equal soaring profits. AMD generated $2.79 in earnings per share in 2021, a whopping 117% year-over-year growth rate, and analysts expect the figure to jump to $4 per share this year.

Wall Street is on board

The 38 Wall Street analysts who cover AMD have arrived at a consensus rating of overweight, which is bullish for the company’s stock. And remarkably, just one analyst in the entire group recommends selling.

Their average price target is $141.35, representing a 52% upside from where AMD stock trades today. But Wall Street firm Rosenblatt Securities alone is far more bullish, betting the stock could soar by 115% to $200.

Wall Street opinions aside, there are grounds to argue that AMD stock is cheap on a valuation basis right now. It trades at a forward price-to-earnings multiple of 23, a premium to the Nasdaq 100 index which sits at a forward multiple of 18. However, with quarterly revenue growth in the high double-digit percentages, it’s understandable that investors would value AMD above the broader tech market.

Plus, circling back to the company’s focus on adaptive computing, the decade ahead could be incredibly strong for AMD. But beyond that, the pace at which technology is advancing will only bolster the need for AMD’s powerful semiconductors, and that trend is unlikely to reverse anytime soon. As long as the tech landscape remains on the current trajectory, AMD is a stock that investors should own.