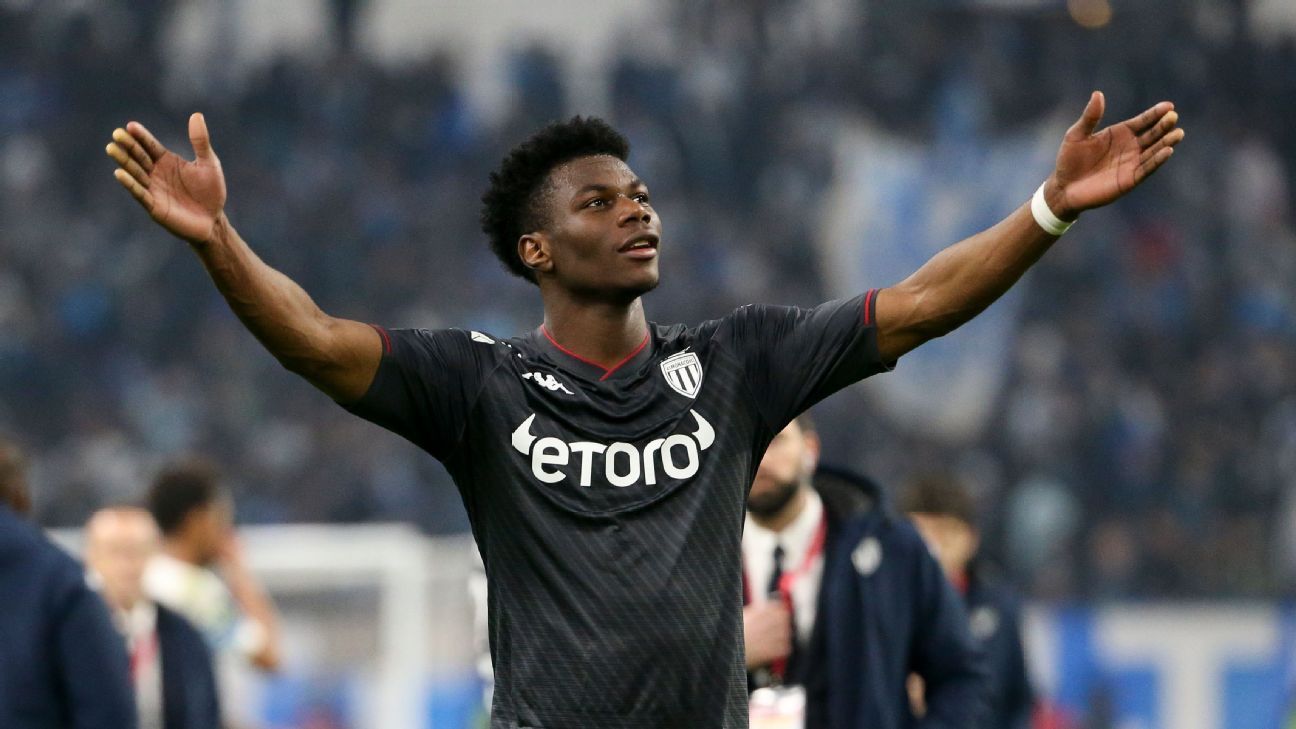 Erik ten Hag, who is set to take over the managerial role at Manchester United, is keen on signing Monaco midfielder Aurelien Tchouameni, sources told ESPN.

Ten Hag discussed his thoughts about the United squad as part of his interview for the job at Old Trafford last month and official confirmation of his appointment could come as early as the end of April.

The recruitment department at United have also been finalizing shortlists on players in each position for the summer transfer window, and Ten Hag will be allowed to present his own targets. Among them is Tchouameni, the 22-year-old midfielder who is enjoying a fine season in Ligue 1. Tchouameni initially impressed under former Monaco manager Niko Kovac and has raised his game further under Philippe Clement, following his arrival in January.

– Stream LIVE games and replays on ESPN+ (US only)
– Don’t have ESPN? Get instant access

Monaco are open to negotiations regarding a move for their rising star this summer and will ask for a transfer fee of €60-€70 million. Sources told ESPN that Paris Saint-Germain are interested in the Frenchman but added that as it stands, he favors a move away from France. Chelsea have also made contact with Tchouameni’s agent and Monaco but United may have the upper hand on their Premier League rivals considering the uncertainty over the club’s ownership at present.

Tchouameni can play in every position in midfield — from a holding position to a more box-to-box one — and it is this versatility that appeals to Ten Hag.

The incoming manager will likely lose Paul Pogba, who is set to leave the club at the end of his contract this summer, while there are question marks about the futures of several players at Old Trafford. Among them is Eric Bailly, who is looking to leave, according to sources. The defender has not started a game since December and has been omitted from the matchday squad by interim boss Ralf Rangnick for the last two fixtures against Leicester and Everton despite being fully fit.

Bailly, who only signed a new contract in April 2021, has grown frustrated at a lack of opportunities and wants to play regular football elsewhere. † Julien Laurens and Rob Dawson

Real Madrid are optimistic about signing Kylian Mbappe this summer, sources told ESPN, although the club are aware that Paris Saint-Germain are trying to convince their star forward to extend his contract.

Mbappe has long been Madrid’s primary transfer target and after they failed with a late bid to sign him from PSG last August, the LaLiga giants have been favorites to land him on a free transfer this year when his deal expires in June. The France international has been coming under ever-increasing pressure from PSG to renew, though, and admitted earlier this month that he had “new elements” to consider, insisting that he was yet to take a decision on his future.

– La Liga on ESPN+: Stream LIVE games and replays (US only)

Sources told ESPN that despite those comments, Real Madrid remain cautiously optimistic that their long-term pursuit of Mbappe — which began when he went on trial at the club in 2012, meeting boyhood idols Zinedine Zidane and Cristiano Ronaldo, and again when he left Monaco for PSG in 2017 — will finally end with his signing this summer.

Mbappe has been in outstanding form for PSG in recent weeks, scoring 10 goals in his last eight Ligue 1 games including a hat trick in a 6-1 win at Clermont on Saturday.

He shone in both legs of PSG’s Champions League round-of-16 elimination at the hands of Real Madrid, scoring in a 1-0 win at the Parc des Princes on Feb. 15 and putting PSG 2-0 up on aggregate at the Bernabeu on March 9 before Karim Benzema’s second-half hat trick turned the tie in Madrid’s favour.

There’s also optimism around a contract renewal for another player who shone that night — and against Chelsea this week — midfielder Luka Modric.

The Croatian has shown some of the best form of his Real Madrid career this season at 36 and sources told ESPN that while no agreement has been reached yet, a deal is expected to extend his stay at the Bernabeu by another season. — Alex Kirkland and Rodri Faez

Gab Marcotti debates what could be influencing Kylian Mbappe’s decision regarding his future at PSG.

Tottenham are already set to commit €80m on making loan signings Cristian Romero and Dejan Kulusevski permanent, but the club plan to back Antonio Conte further this summer as he tries to turn Spurs into Premier League title contenders, sources told ESPN.

Conte has publicly indicated the north Londoners will pay the €55m fixed fee to Atalanta for Romero while sources told ESPN that he is pushing for Kulusevski’s temporary switch from Juventus to be formalized by taking up an option to buy the winger for €30m.

Conte has ambitious plans to overhaul his squad with sources suggesting a right-back, centre-back, a midfielder, a back-up striker and a back-up goalkeeper are his main priorities; a list which senior figures at Tottenham are willing to support in principle despite the club posted a pre-tax loss of £80.2m in their most recent financial figures last November.

Spurs’ budget will be impacted by whether they qualify for next season’s Champions League and if they can maximise value from several players deemed surplus to requirements — who include Tanguy Ndombele and Bryan Gil, both on loan at Lyon and Valencia respectively — but there is a recognition a big transfer window lies ahead both to satisfy Conte and also keep leading striker Harry Kane happy at the club.

Kane pushed to leave Spurs last summer after growing frustrated at a lack of silverware but chairman Daniel Levy dismissed interest from Manchester City. Spurs’ chances of avoiding another protracted wrangle this summer appear to have improved with City now reportedly turning their attentions to Borussia Dortmund’s Erling Haaland.

It was also expected that Manchester United would pursue Kane if they appointed former Spurs manager Mauricio Pochettino as their next manager but Erik ten Hag’s imminent arrival in the Old Trafford hot seat means it is less clear if they will attempt to prize him away.

Regardless, a statement of intent in the market from Spurs would help convince Kane he can win silverware at the club. — James Olley

Mark Ogden feels Manchester United will need to fully back Erik ten Hag if he is to prove the right choice for the club.

The Manchester United hierarchy were not rushed into agreeing a deal with Erik ten Hag to become the club’s next manager by reported interest from RB Leipzig, sources told ESPN, despite some within Old Trafford believing links with the German side were designed as a negotiating tactic.

Ten Hag is set to be appointed as the new permanent boss with an announcement due before the end of the season and possibly a little later this month. United’s pursuit of the new manager has been led by football director John Murtough and technical director Darren Fletcher, who have reported to chief executive Richard Arnold, with joint-chairman Joel Glazer having the final decision on the appointment.

The framework of an agreement with the Dutchman was agreed amid reports RB Leipzig could look to scupper the deal. But sources close to Leipzig insist they were baffled by the links while stressing their support for boss Domenico Tedesco.

Sources added that Leipzig considered Ten Hag as a candidate following the dismissal of Jesse Marsch in December but have been impressed with results under Tedesco since his appointment. Leipzig have lost just once in 2022 — to Bayern Munich in February — and remain in both the Europa League and German Cup.

It was always United’s plan to come to a decision on their next manager before the end of April to allow the new man to have an influence over summer recruitment. — Rob Dawson