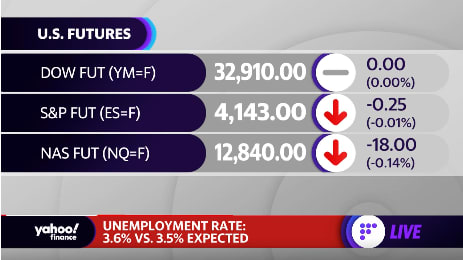 JULIE HYMAN: –expecting right now in terms of the various numbers. Change in non-farm payrolls, they’re looking for an addition of 380,000. That’s the median estimate from economists. Unemployment looking to have ticked down to 3 and 1/2% in April from 3.6% in March. And average hourly earnings are forecast to have risen by 5 and 1/2%. So those are the headline numbers.

And guys, the backdrop for these numbers is pretty dramatic. After yesterday, we had a steep, steep selloff in the markets, the steepest that we have seen going back to 2020, as people are sort of rejiggering their rates expectations. So the stakes are pretty high, going into today’s report.

–calling out, and you can see right there, you saw that large bump up in wages over the past year, but now things are starting to cool down. We had companies like Manpower Group, Wells Fargo, some companies knowing that perhaps wage inflation is past its peak, that might be good for corporate profit margins, maybe not so good for workers.

BRAD SMITH: And to what extent can we glean any type of insights from the private payrolls numbers that are–

–in the onset of the pandemic. That continues to lead job creation, at least on the private payroll side. Will that also be the case here in the data that we see later on? Also going to be watching for some of the education and health services and professional and business services–

JULIE HYMAN: They’re falling. They are not rising. So basically, the wage increases that we’re seeing, broadly, are not keeping pace with inflation. And that, my friends, is a problem for people who are trying to buy gas and buy food in a very inflationary environment. So, yeah, it’s great that people have jobs, very broadly, but this wage issue is one of the things that’s causing the Fed to do what it’s doing, for example.

BRIAN SOZZI: Yeah, and I think it’s a large part of the reason why we’re continuing to get weak reads on the US consumer. It’s not getting talked about. Hence, I’m going to throw it out into the table here today. Look at UnderArmour. We’ll talk about it later. I don’t want to get too off into the weeds in it.

But when you see a company report weak sales and weak profits like an UnderArmour, you have to think, well, is the consumer balking at price increases? And I went to Dick’s Sporting Goods this past week, and I was astonished by the prices on some of these UnderArmour clothes. And really, you just get the sense that wages are not keeping up with inflation as you mentioned, Julie, and consumers are leaving the stuff on the shelves.

BRAD SMITH: And does it drive any type of re-entry into the workforce and the participation? If you were to look at the JOLTS data, perhaps no.

BRAD SMITH: And you need a second–

BRIAN SOZZI: If you want UnderArmour clothes, you’re going to need a second job to get the stuff.

BRAD SMITH: And what we’ve seen in the participation rate, which was largely range bound over the course of last year, even coming into early this year, we finally got that up to, what, 62.4 in this most recent report. So we’ll see if that continues to move higher. But for the labor force participation rate and the productivity, productivity is actually down.

And so with that in mind, moving forward into this report, it’s going to be interesting to see how many more people, to your point, because of inflation, are looking across what their income is right now and where they have to combat that by either picking up a second or even third job, and if that’s something that they manage their own time themselves and what that productivity looks like.

BRIAN SOZZI: Well, I have to leave right at 11:00 because I have to go start my DoorDash job after this.

BRIAN SOZZI: I need to go deliver some food.

JULIE HYMAN: Good, we’ll make an order with you. We’ll make a special order with you. So we’re just a little less than a minute now until the numbers. And I just, again, want to reiterate the setup for this. In other words, we are seeing futures continue their selling after deep, deep selling that we saw in yesterday’s session, with all three major averages seeing their biggest one-day drops going back to 2020, with the NASDAQ down by a hair shy of 5 % yesterday.

Of course, everything could change in these futures once we get the numbers, but still, the setup here shows a lot of trepidation in the market and as we watch rates as well. We’ve been watching yields, of course, in the Treasury market that had been ticking up, as we saw concerns yesterday.

Right now, they’re not much changed, but that, of course, again, could change as we get these numbers in just about five seconds now, as we are looking for 380,000 for these payrolls numbers. And I’m waiting for the numbers to come through here. It looks like we might be a couple of seconds late here today.

BRIAN SOZZI: Above a lot of consensus. Initially, I would just say, consensus was under 400,000 on some of the higher end estimates. I think Aneta Markowska over at Jefferies is looking for about 475,000. Again, look at that market reaction. Just instantly to the positive on perhaps the early view that this report gets the Fed perhaps a little less aggressive. The economy is slowing down a little bit. Inflation is coming down.

JULIE HYMAN: OK, let me just reiterate the numbers real quick. 428,000, because we were seeing them slow to populate. 428,000 is the overall headline number here, considerably better than 380,000 that was estimated. So, so much for ADP once again, with that number coming in lower than estimated. The unemployment rate unchanged at 3.6%, so it did not tick down. Remember, that comes from a different survey. That’s why you sometimes see a gap between the two. And that wage number that I was watching, average hourly earnings coming in, in line with estimates with a year over year gain of 5 and 1/2%. Your participation rate, Brad, 62.2%.

BRAD SMITH: Yeah, little changed there. 62.4 is where we were previously, so just a slight downtick there. Also, on the sector front, which I was keeping a close eye on, of course, leisure, hospitality. Job gains were widespread, the largest gains occurring in that sector, though. Also in manufacturing and in transportation and warehousing as well. Continuing to dive into some of the numbers here, leisure and hospitality, that increased by 78,000 during the month of April. Also continued in food services and drinking places, that really accounting for the majority of it, followed by accommodations, 44,000, 22,000 respectively.

BRIAN SOZZI: Two negatives for me off the jump, construction jobs, little change. And you’ve seen mortgage rates above 5% for some time here. You have to wonder if the housing market slowdown continues and at what pace. Heard a lot of that commentary from Zillow last night on its earnings call.

And also, too, the average work week unchanged, so if the economy is, in fact, starting to slow down because of inflation, consumers pulling back, workers may not be getting more hours. That’s something to keep in mind as we move forward.