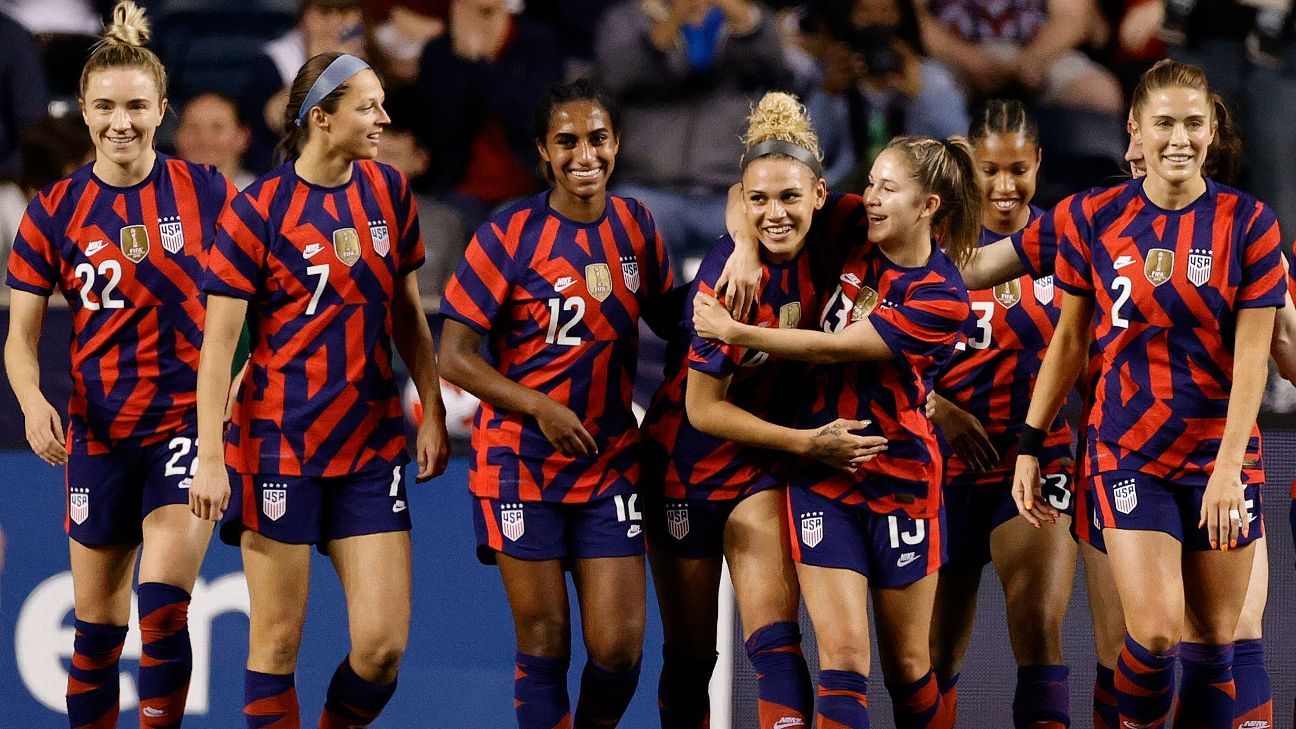 Ahhh, Uzbekistan. I must admit, as I was calling the second of two friendlies the US women’s national team played against Uzbekistan for ESPN, I did start to wonder 30 minutes in — after the US had scored six goals — why Uzbekistan said yes to this two game drubbing.

Growth mindset, I get it. You’ve got to play the best to be the best. Yep. It just seems that you can sometimes extract a lesson less emphatically and in a less psychologically damaging way, no? Uzbekistan, at No. 48 in the world, is the lowest-ranked team the USWNT has faced in seven months. The US is ranked No. 1.

As I try to summarize what we learned about this April international match window as it relates to the USWNT, I keep finding myself saying “Yes, but …”

The US team scored 18 goals over two games vs. Uzbekistan. Impressive, indeed.

The US had nine different players score those 18 goals.

That front three of Mal Pugh, Catarina Macario and Sophia Smith are creative, dynamic, and fun as hell to watch. The US starting front five often looked silky smooth.

The outside backs, Emily Fox and Sofia Huerta, looked impactful and confident getting forward. The subs came in and made an impact.

Yes, but … it was Uzbekistan. Herein lies the problem. You do not want to be taking 38 shots to your opponent’s zero (as in goose egg, nada, not one shot at all — not even off target), as was the case in the second game, a 9-0 win for the USWNT.

You need to get these younger US players time, minutes, confidence, chemistry — all the above — but when it involves teams like Uzbekistan, Iceland, New Zealand and the Czech Republic (the USWNT’s opponents so far in 2022), it is hard to assess how much growth is even happening.

You can, for sure, check the confidence and chemistry boxes, but this level of opponent does not expose you enough to fully appreciate what needs to be tightened up technically and tactically. It doesn’t expose these young players to those critical moments of adversity that require you to slog your way through, find a way, lean on each other, eventually realize you can survive and most importantly, thrive, in those moments.

And yes, to be fair to US Soccer, I appreciate how hard it is to schedule teams right now. The COVID-19 pandemic continues to wreak havoc with long quarantines required upon return for some countries. World Cup qualifiers in April meant all competitive European teams were not available in this window. The Euros in early July mean the June FIFA window will be tough to schedule as well.

But all I know is that these opponents must be stronger (there, I solved world peace) to fully assess how these players are doing. It is why Vlatko Andonovski and his staff will be so intently watching the National Women’s Soccer League and other professional leagues across the globe this April, May and June. That’s what will give them their best read on where these players are.

Now to the younger players vs. veteran players debate: It is difficult to predict what that mix will look like for the summer. If anyone tries to, I ain’t buying what they are selling because of the rant above and because we haven’t seen the rest of April, May and June — all huge months for the veterans trying to get back into the fold.

Alex Morgan, Christen Press, Tobin Heath, Megan Rapinoe and Becky Sauerbrunn will need to shine in these coming months for Vlatko to make that move. And as Vlatko has said repeatedly, “Everyone must earn the right through their play with their club teams, to be called back into the US team.”

And don’t forget that middle group of players as well. We haven’t been talking about them in the short term due to pregnancy (Crystal Dunn, Julie Ertz and Casey Krueger) or injury (Sam Mewis). Maybe they are not available for this summer’s World Cup and Olympic qualifiers in Mexico, but that group will be very much in play come 2023.

So there you have it. April proved beneficial for chemistry and confidence, for sure (thank you, Uzbekistan), but May and June will really bring the answers. And hopefully (insert fingers crossed emoji) that comes with a better June opponent for US games.