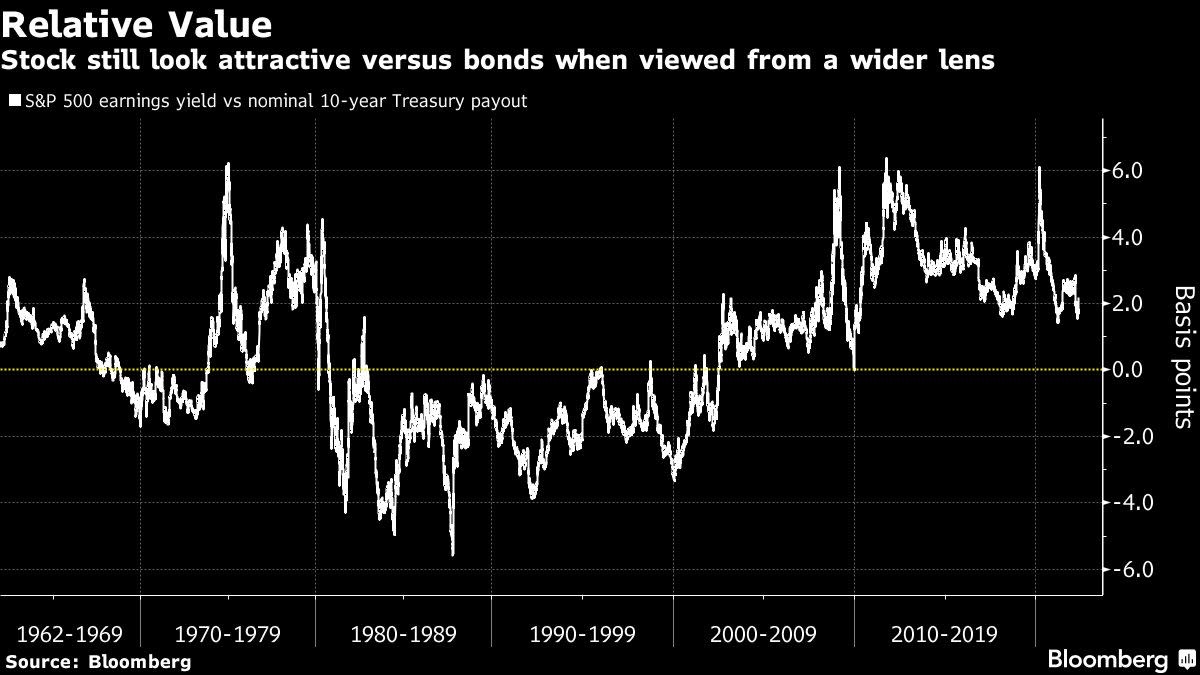 (Bloomberg) — One thing to realize about a stock selloff: You won’t know it’s over until long after it ends. But that doesn’t keep people from trying to pick a bottom. Valuation, sentiment and history each form a basis for study.

Reversion to a mean is the expectation. Which mean to revert to is the problem. A straightforward model in which elevated valuations return to normal could imply either a garden-variety tumble, or a truly awful one, depending on how “normal” is defined. If a purging of animal spirits among overenthusiastic bulls is how you pick the floor, a case can be made that we’re not quite there.

“Having a framework for times of uncertainty is imperative,” said Chad Morganlander, senior portfolio manager at Washington Crossing Advisors. “Not having a proper risk protocol or risk framework is equivalent to not having a carbon monoxide detector or fire detector in your house. Or driving drunk in a Ferrari blindfolded.”

Following are a few models for considering where the market might ultimately land.

First the good news. With its 17% decline this year, the S&P 500 now sits in line with the recent average when measured by the price of its constituents divided by their overall earnings. Using the mean P/E multiple going back three decades — a period generously distorted by the dot-com bubble but which also reflects what many consider a modernized view of valuations in the era of buybacks and intangible assets — the benchmark’s ratio is 19.5 , slightly below the historic average of 20.3.

A less-optimistic methodology elongates the historical series, generating a significantly lower average valuation for the market, which requires a bigger decline for things to normalize. Among the most pessimistic frameworks is Robert Shiller’s cyclically adjusted price-earnings (CAPE) model, going back more than a century and smoothing the ratio out over 10-year intervals. Using that, the S&P 500 would need to plunge by a hair-raising 47% to wring out its excesses.

A third lens considers what might happen should the retreat cascade into a bear market. The S&P 500 has already fallen 18% from its January high, approaching a bear market, or a drop of at least 20% from a peak.

The bear-market scenario introduces an element of cheating, because it effectively says “if things get worse, they will be worse,” though it nevertheless provides context. Since World War II, stocks in a full-blown bear plunge stopped falling when the P/E ratio hit 12.6, on average. Following the same blueprint would mean another 35% drop for the S&P 500.

A big bull case for equities for the past decade is the argument that with bond yields stuck near record lows, stocks are the only place to be given corporate profits keep growing. That narrative has been challenged this year with the Federal Reserve embarking on a rate-hiking cycle to combat inflation.

One approach that plots the relationship between bond yields and corporate earnings is something known as the Fed Model. While not universally accepted, the technique offers a window into the always-shifting bond-equity link that may provide clues on the fate of stocks in a new high-rate regime.

In the simplest form, the Fed model compares 10-year Treasury yields and the earnings yield for the S&P 500, a reciprocal of P/E that measures how much companies are generating in the form of cash flow relative to share prices. Right now, while the edge for equities is shrinking, with bond yields at one point spiking above 3% for the first time since 2018, it still offers decent buffer, at least relative to history.

As things stand now, the picture shows stocks as still moderately expensive relative to the history of the post-crisis bull market, but quite cheap compared with the longer historical series — a period in which bond yields were generally much higher.

While valuations offer a guidepost on where the market is heading, a slew of investors and strategists say the eventual turning point may not arrive until sentiment is washed out.

Julian Emanuel, chief equity and quantitative strategist at Evercore ISI, says he’s watching three things for signs of capitulation to determine whether the selling has exhausted: the Cboe Volatility Index to trade north of 40, the Cboe put/call ratio above 1.35 and a day or volume spike similar to Jan. 27, 2021, when 23.7 billion shares changed hands.

While the VIX usually moves in opposite direction from the S&P 500, it fell in tandem with the stock gauge Wednesday, an indication of a lack of demand for hedging, and last traded at 33. Meanwhile, this week’s ructions don’t even rank in the top five busiest days of 2022 and the put/call ratio has stalled at 1.3.

While professional investors such as hedge funds have cut their equity exposure to fresh lows, the day-trader army, in the face of mounting losses, kept pouring money into stocks in April, albeit at a slower pace.

To Brian Nick, chief investment strategist at Nuveen, the market is close to a bottom.

“What the market’s priced in is more or less what the Fed’s going to have to do,” he said. “And so there shouldn’t be a lot more bad news coming.”

Among technical signals chart watchers use, the Fibonacci series is among the least instinctive, based on a number sequence described by Leonardo of Pisa in “Liber Abaci” in 1202. Analysts swear by the methodology, however, if for no other reason than a lot of people consider the numbers when trading.

The S&P 500 will likely head even lower and test a notable Fibonacci 38.2% retracement level at 3,815 before finding some support, according to Mark Newton, a technical strategist at Fundstrat Global Advisors. That refers to the amount of retracement of the bull-market rally from the March 2020 low. Market technicians monitor retracement levels based on Fibonacci numbers to identify points of support and resistance where stock prices potentially reverse direction.

Based on the same charting tool, Chris Verrone at Strategas Securities sees a bigger downside target, the mid-point of the entire pandemic rally. That would take the S&P 500 to 3.505.

With outcomes ranging so wide, the exercise highlights the risk of relying too much on any single tool.

“Unfortunately, no indicators are always accurate, and it is important to take emotions out of the equation,” Paul Hickey, co-founder of Bespoke Investment Group, said by email. “Ideally we like to focus on a number of different ones to see what direction they are pointing.”